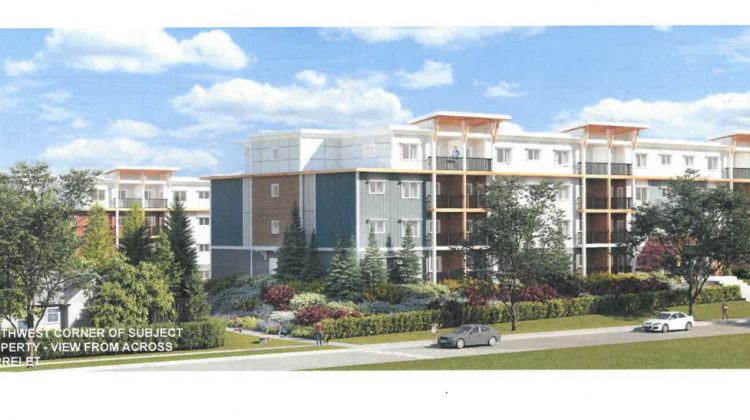 Rendering of the proposed development at 695 Aspen Road in Comox. (Supplied by Town of Comox)

A proposed housing development in Comox is being met with opposition.

The development from Highstreet Ventures Inc., is proposed for 695 Aspen Road. It includes three apartment buildings, each four storeys tall, and one four-storey, mixed-use residential/commercial building.

The plan is for ‘Aspen View’ to include 73 one bedroom/one bathroom units, and 159 two-bedroom/two bathroom units for a total of 208 rentals and 24 for-sale condos.

Residents packed into Comox Council chambers on Wednesday night to hear from the developer and those opposed to the project.

Highstreet is proposing to make a cash-in-lieu contribution of $142,932 to the town’s Affordable Housing Reserve Fund.

Additionally, it says it’s working with the town to provide six affordable, adaptable housing units in the condo building at below cost, as well as a portion of the commercial area for a community daycare.

Those opposed to the development presented a petition with the names of over 500 residents. They cite density, traffic, and parking concerns for both residential and foot traffic as their main concerns.

Rita Walls spoke on behalf of the people against the development.

She said very few residents they spoke to refused to sign the petition.

“Most of them did not even know what was planned for the land, or in fact, the land was recently sold,” she said. “Residents were shocked to learn of the size of the proposed development and concerned that it will forever change the communities in this area of northwest Comox.”

Walls added there are many valid reasons for this development not to go through. She said the three “significant reasons” are traffic, parking and the height of the building.

Walls said the traffic impact assessment report shows that the development will bring a minimum of 468 residents to Comox.

“Only 333 parking stalls are planned to satisfy both residents and visitors,” she added. “So the question to council is simple: if approved, where will the overflow parking go?”

“We have built over 3,500 homes across B.C., Alberta, Northwest Territories and Ontario,” she said.

She said Comox is in need of affordable rental housing.

“Recently the Canadian Mortgage and Housing Corporation released statistics, and for populations over 10,000 people, Comox had the highest increase in rent in all of B.C.,” Wilson said. “It rose 10.8 per cent from October 2018 to October 2019 and Comox’s vacancy rate in October 2019 was 1.4 per cent.”

The land is currently vacant and is zoned Core commercial.

Council later approved first and second reading for the development rezoning application, and the project will go to a public hearing on March 5 at the Comox Community Centre.