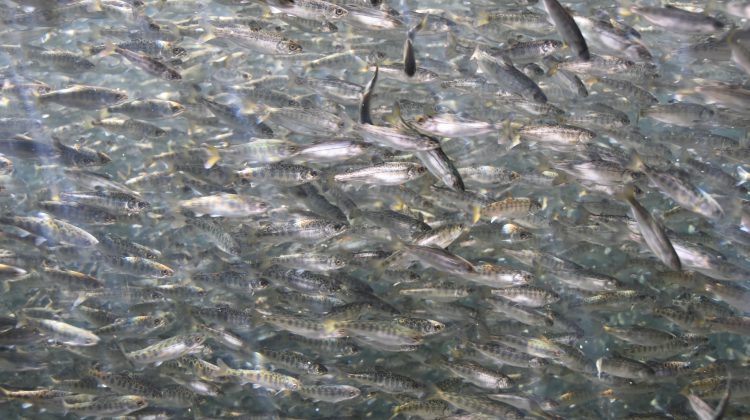 : Puntledge River Hatchery Chinook smolts ready to be released in May 2019. (Supplied by Stephen Watson)

BC Hydro is taking steps to help local salmon survive their journey to the ocean.

From now through to April, BC Hydro is introducing an operational change to improve fish survival.

BC Hydro spokesperson, Stephen Watson, said that back in 1993, “we installed an angled screen inside our penstock or large pipe that delivers water to the powerhouse, so that it could safely return out-mitigating Chinook, Steelhead and Coho juvenile fish that enter it, back into the river.”

“At the time we thought the efficiency exceeded 95 per cent. In recent years we undertook studies, tests and monitoring and found the fish screens were not meeting an expected performance for the smaller fry at full water flow,” Watson added.

Summer Chinook is a key species of interest.

“DFO has been working to recover summer chinook, a species of high interest and value, whose emergence starts as early as February and can go to May while out-migration lasts until August,” said Fisheries and Oceans Canada’s Puntledge River watershed enhancement manager, Lorne Frisson.

“However the penstock fish screen, when the salmon are smaller from February to April and are more susceptible, was not functioning as hoped and created mortalities. Once fish are bigger and the screens are working under optimal conditions, including being cleaned, the screen performance meets performance expectation.”

BC Hydro, DFO and the Ministry of Forests, Lands and Natural Resource Operations formed a technical committee and over four years developed ways to try to get to the 95 per cent survival goal past the penstock intake.

“By reducing power generation or increasing flow discharge over the dam at higher power generation levels, the facility will be more effective in safely passing fish during the out-migration,” Watson said.

“We’ll be making adjustments to our operations on the Puntledge River from February to April as part of a pilot project with the goal of improving the survival rate of smaller fish. We’re committed to protecting the environment by reducing the impact our operations have on it.”

When water is free spilling over the diversion dam, more fish migrate over the dam, past the penstock intake.

BC Hydro expects the reduced power generation, along with increased spill, for three months this year may result in about $380,000 in lost revenue.

Actual cost year to year will depend on water supply and market conditions.

This year there are roughly five weeks of maintenance work and a generator shutdown planned within that time period, whereas other years that work may be less.

The fish screens were cleaned this week.

“This operational change to get good fish screen efficiency, among other ongoing initiatives, will help in the overall goal of hopefully having more Summer Chinook returning to the Puntledge,” Frisson said.