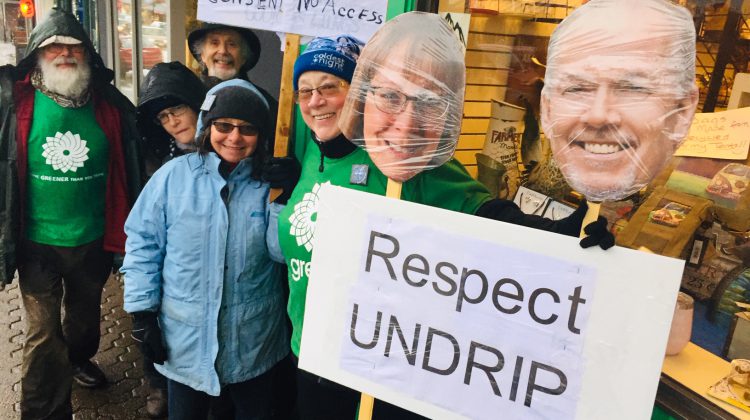 Some of the protesters from a rally in support of the Wet'suwet'en hereditary chiefs. (Troy Landreville, MyComoxValleyNow.com staff)

Wet’suwet’en hereditary chiefs opposed to a natural gas pipeline on their territory are getting support in the Comox Valley.

This afternoon, protesters gathered in downtown Courtenay in solidarity with the Wet’suwet’en First Nation.

They are blocking access to a work camp near Smithers after issuing an eviction notice to construction crews.

One of the local protesters in Courtenay today was Megan Ardyche, who condemned yesterday’s RCMP raid. 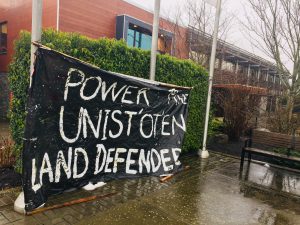 The protesters hung a banner in front of Courtenay City Hall that read, ‘Power to the Unist’ot’en Land Defenders.’ (Troy Landreville, MyComoxValleyNow.com staff)

Ardyche said LNG is not a good transition fuel.

“We should not be investing time and money into promoting LNG, so I’m not in favour of the pipeline because I would like to have a livable future for my great-great grandchildren, and the pipeline is not going to help with that.”

She said there was quite a range of protesters, including some First Nations people.

Ardyche added that even if the government doesn’t listen to the protests, those opposed to the pipeline have an obligation to make their voices heard in support of people who are “being oppressed and whose rights are being violated.”

The protesters hung a banner in front of Courtenay City Hall that read, ‘Power to the Unist’ot’en Land Defenders.’

There are plans for another protest at 1:00pm tomorrow in front of Courtenay-Comox MLA Ronna-Rae Leonard’s constituency office at 437 5th St.