Both sides of Highway 19 barricades speak out 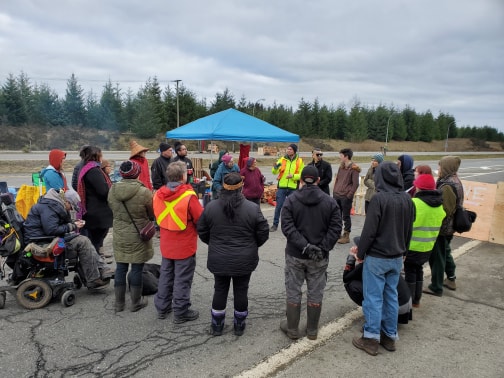 Blockades in support of the Wet’suwet’en were set up along Highway 19 on Monday. They have since been removed. (Supplied by Deraek Menard)

The barricades in support of Wet’suwet’en hereditary chiefs has the community divided.

Last night, police officers kept the peace when a group upset about the barricades set up along Highway 19 approached the supporters.

Click here to see a video of the scene.

Geordie McCredie said he and his friends, along with “concerned citizens,” went to the Cumberland Connector to remove debris blocking the highway.

“We didn’t go with any intention of violent confrontation or anything like that,” McCredie said. “While the cops aren’t allowed to remove encampments, we don’t have any such restrictions so that’s what we were going to go and do.”

McCredie added that once the police saw how many people showed up to remove the barricades, they became concerned that they wouldn’t be able to control the situation.

Meanwhile, the Nanaimo-based group Extinction Rebellion says, “We, a group of concerned residents defending our home in the K’omoks Territory with the aid of some K’omoks Nation people blockaded Highway 19 at Exit 117 for approximately 22 hours in response to the violent oppression happening in the Wet’suwet’en nation.”

“Initially, our plan was to blockade the highway for as long as it took for the provincial and federal government to respond appropriately to the international outcry over this oppression. However, due to a series of escalating security/safety concerns, we were forced to either remove ourselves from the area or suffer physical violence at the hands of radical ideologues and racists.”

McCredie maintains that he and his group didn’t make any threats or promote any violence.

“We approached, the one officer came up and spoke to me and some others, and actually we had already spoken to another officer who had just driven up as we were crossing the highway and he informed us that the highway was now clear, and they had limited them to one corner of the intersection, there, so people were at least able to do a loop-around ‘uwee’ and get through.”

“At some point between 7:00 and 8:00pm a group of young white men, clearly intent on harm from their lack of communication, aggressive stance, posture, and body language took a position oblique to our camp. After a brief interaction with one of our coordinators, the police were notified of the clear intentions of these men. It was discovered that these men had driven all the way from Parksville in the night with the intent of helping to orchestrate an attack on our camp.

“Around the same time, we received notice that there were groups of men assembling in Cumberland wearing hoodies and getting ‘amped up’ to come ‘teach us a lesson.’

At this point, we felt that our safety was a serious enough concern to move our barricade off the highway and down to the on-ramp to the highway. Additional police units were called in for assistance, and just as we finished the movement of our barrier, we were notified of the approximately 30 clearly drunk, belligerent, and very aggressive men gathering in the woods on either side of the highway from us.

At this point, the police felt that the situation was no longer safe and that they were completely unable to protect us from the possibly armed attack these men desired to have on our peaceful nonviolent direct action.

At approximately 9:45 pm, we conceded that the safety concerns were too great and elected to close down our barricade and leave. This was entirely due to racially motivated aggressors and is a clear hallmark of the attitudes with which the governments of Canada and British Columbia have approached relationships with First Nations.”

The group said this was not their event but rather, “Extinction Rebellion Nanaimo was aiding in the facilitation of this event at the behest of Wet’suwet’en Hereditary Chiefs.”

Menard added that there were “very clear threats” of physical violence on social media.

McCredie stressed that the cause wasn’t what concerns him, but the way the supporters went about getting their point across.

“This is violating the rights of everyone else. There is no consideration for humanitarian concerns, like, ‘Oh, you have a sick child going to the (BC) Children’s Hospital? Well, that’s too bad. You’re delayed.’ And, ‘Oh you had surgery today? Well, you can just go to hell.’”

He said this “sort of a protests” turn even those who agree with the cause against it.

“That’s terrorism. That’s trying to inspire fear to achieve a political aim and that’s what terrorism is. That’s the dictionary definition of it.”

McCredie said he “absolutely” supports the right to free speech.

“We have our right to express our opinion and so do they, to express theirs, but when you start violating other people’s rights, that’s not free expression.”

Menard, meanwhile said, “These violent opposers were severely uneducated on this issue and don’t understand why this is happening. Getting to the point where you can rile yourself up to cause harm is a huge problematic symptom for our society.”

The Comox Valley RCMP said its primary concerns during the protest were public safety, police officer safety, and the preservation of the rights of demonstrators to their freedoms of expression, association and mobility.

“We received several complaints about the traffic disruption,” said media relations officer, Const. Monika Terragni. “We had a uniform presence on the highway in order to maintain the public peace and be a calming influence while we worked to resolve the matter peacefully.”

The Comox Valley RCMP is sending a reminder that police “are enforcing the criminal code and have/will investigate any and all complaints regarding criminal activity associated with the protest.”