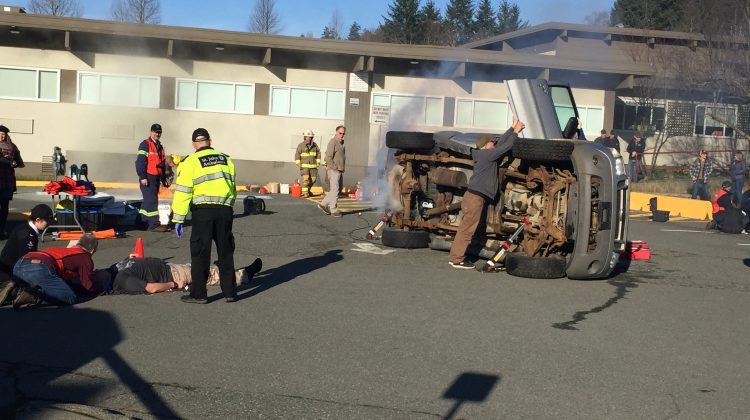 Preparation is everything in the case of an accident, natural disaster, or emergency.

They worked together to test their cohesiveness in the event a real accident occurs.

The scenario involved a vehicle that has lost control due to an earthquake and struck a hydro pole, downing power lines.

District staff simulated being first on scene for initial response and triage before handing making way for firefighters to complete the extraction and treat the patients.

To increase the visual effects and heighten the sense of realism, pyrotechnics and smoke were used at the scene.

During the exercise, staff members practised using a fire extinguisher, which is a mandatory requirement to maintain regular qualifications.

“The key is that 80 per cent of the rescue that ever gets done is done by convergent volunteers, by people who are just in the neighbourhood, your neighbours, the people around you, the staff,” Roy said.

“Only 20 per cent will get done by the actual emergency responders. So we need to raise awareness about some of the critical jobs that have to be carried out, post-earthquake.”