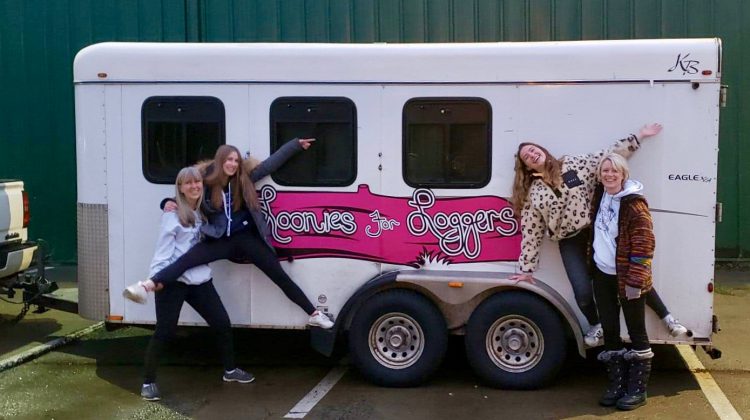 The forestry workers strike may be over, but that doesn’t mean the end for Loonies for Loggers.

After nearly eight months, the strike officially ended over the weekend.

That’s when Western Forest Products announced that its hourly employees represented by United Steelworkers Local 1- 1937 voted in support of a tentative agreement.

But before that, it was tough sledding for all those impacted by the strike.

That’s where Rona Doucette and Tamara Meggitt come in.

They started Loonies for Loggers last September. Since then, they’ve been delivering groceries and other items to the forestry families up and down the island, as well as in Powell River.

Now that the strike’s over, Doucette and Meggitt say they will continue their deliveries until June 1st.

Doucette said they’ll then take  June off before getting right back at it.

“July 1st we are basically going to be Loonies for Loggers 2.0.,” she added.

Doucette said that history shows that it’ll likely be a slow recovery from a strike that started on Canada Day.

“After the strike of ’86, I know personally how hard it was to get back on your feet, after that lengthy of a strike,” Doucette said “This was an eight-month strike, so we are going to continue to provide food for these families.”

Doucette said it takes about a month to do one complete cycle, which includes grocery shopping and then delivering the items.

She said they are getting low on funds but have more fundraising.

Loonies for Loggers is not yet a registered charity. Doucette said that’s because she and Meggitt didn’t think the strike would last for as long as it did.

“We figured we would be doing food deliveries for a couple of months and then the guys would be back to work, and we would still do Christmas (hampers) for them,” Doucette said. “We never imagined it would last this long, so we never had time to become a registered charity.”

Reflecting on the weekend, Doucette said the news of a collective agreement officially being reached came as a relief to both her and Meggitt.

“We were doing a happy dance,” she added. “The morning that the news broke out, both our phones were blowing up, literally.”

But moving forward, Doucette said they will be there to support the families for “as long as the funds allow us to.”

After that Doucette said they will continue as Loonies for Loggers but will shift their focus to helping with medical expenses.

“We found with the past few months, meeting some of these families, that some of them, there are medical expenses that we’ve been helping (them) with.”

“There have been times over the past few months, where Tamara and I, we’ve both been in tears,” she added. “It’s just what these families have endured over the last eight months. Some have no medical, they have to go to their medical appointments, they can’t afford it, so Tamara and I helped out as much as we could with gas gift cards.”

For more on Loonies for Loggers, visit them on Facebook.