BC Community Bat Program asking you to look out for bats 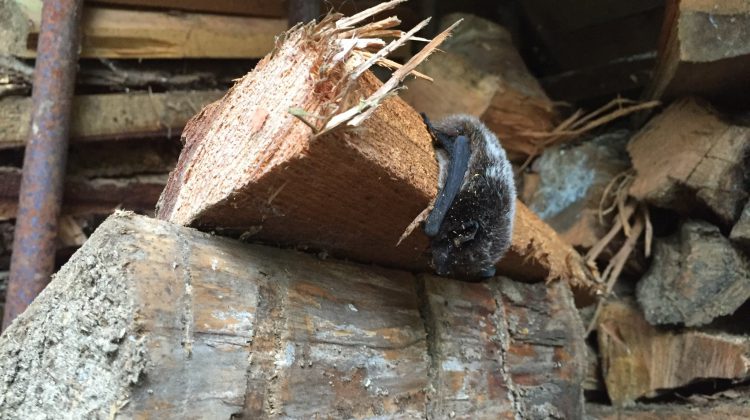 A Silver-haired Bat hibernates in a woodshed in Victoria. (Photo –provided by Habitat Acquisition Trust)

The BC Community Bat Program and the provincial government want you to keep an eye out for bats this winter.

Some of the animals in the province could be suffering from white-nose-syndrome(WNS).

WNS is a fungal disease responsible for the death of millions of bats in eastern North America and researchers say it’s spreading on the west coast.

Mandy Kellner is the provincial coordinator with the BC Community Bat Program and says help from the public is needed.

“To monitor the spread of the disease, we need more eyes on the ground. Outdoor enthusiasts and homeowners with roosts on their property may be the first to find evidence of trouble,” says Kellner.

She also says “detection of WNS in BC is challenging because our bats hibernate in small groups across the province.”

Bats here in the province are at risk for the disease which has near 100% mortality rate for some species, including the Little Brown Bat. Although devastating for bats, WNS does not affect humans.

The BC Community Bat Program says while bats are generally hibernating out of sight this time of year, not every winter bat sighting signals disaster. Bats often hibernate by themselves in a woodpile or basement entryway. If possible, the organization says these sleeping bats should be left alone.

Kellner does say however that you should report any bats you see laying on the ground to the BC Community Bat Program.

“We are encouraging the public to report dead bats or any sightings of winter bat activity to the BC Community Bat Program toll-free phone number, website, or email below. Bat carcasses will be submitted for testing for white-nose syndrome and would provide the earliest indication of the presence of the disease in BC.”