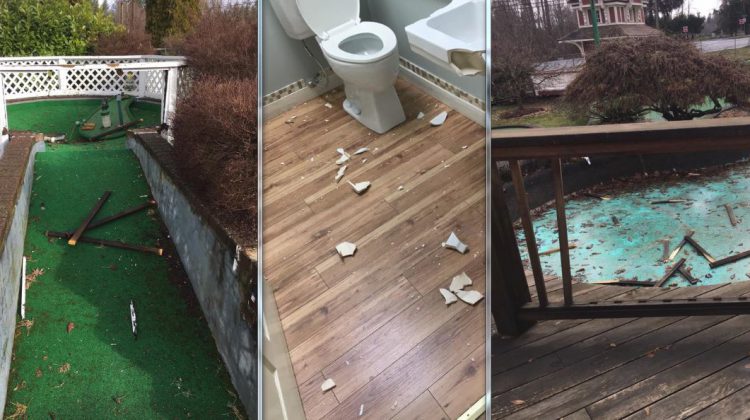 Manager Samantha Seeley said they arrived a few minutes after getting the alarm call just after 1:00am Sunday morning.

Seeley said it was “devastating” to initially see that the front door had been smashed in.

“It is the worst vandalism that we have ever had happen here,” Seeley said. “We know how much this place means to the community and to see the level of destruction was very disappointing.”

The vandals broke the front door, smashed glass all around the facility, damaged the ceramic sink in the women’s bathroom, broke all of the upper storey decorative and plexiglass windows out of the waterfall house, and  kicked out and smashed three of the wooden panels on the deck.

Seeley said that while she doesn’t believe it was targeted, the vandals’ goal seemed to be to cause as much destruction as possible.

“That seems to be the point of it, was destruction, to do damage in as little time as possible.”

They also ‘tagged’ different parts of the property with spraypaint.

The next steps are cleaning up with the hope of opening by spring break. “We should still be able to do that. We have a really wonderful team of people.”

There are cameras in place that captured footage of the vandalism. Now, the RCMP are looking for the two people involved.

Seeley said they are looking for any information that will lead police to the suspects.

“Somebody knows something, somebody is going to talk, and we are just really asking if anybody hears anything to please contact the RCMP, please get in touch with us and we would pass it on,” she said. “We would really like these people caught. The RCMP does have evidence that will connect them to the break-and-enter, and to the vandalism.”

In the meantime, Seeley is thanking people for the flood of support since the vandalism happened.

“There have been so many offers to help,” she said. “It’s overwhelming to see.”

Meet the Team at Bodynetix