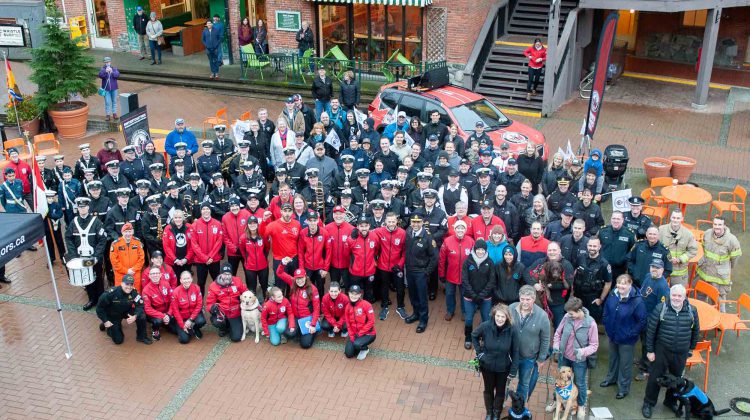 The Wounded Warriors BC team and their supporters at the finish line. (Supplied by John W. Penner)

The director of the Wounded Warriors BC Vancouver Island run is calling it a success.

Jacqueline Zweng said the run was a journey in more ways than one.

“We started the run in sideways rain in Port Hardy, and there are a lot of hills. There’s uphill on every leg of this journey.”

She added, “but just as much as it’s a physical challenge, it’s actually more of a mental challenge because we’re stopping every hour, couple of hours, and talking to new people in different towns, and seeing that sort of release in their eyes that somebody’s here to do something about the conversation about mental health.”

As of this morning, the run has raised $157,000 for mental health supports military members and first responders.

She said the team members “hold each other up,” every step of the way.

“We have lots of conversations about mental health throughout the entire thing and that’s why we thrive: because it’s a safe place to talk about it. As an organizer of this, I see my own team going through their own journeys and coming out on the other side stronger for opening up. So it’s really symbolic of what we’re trying to do within the team, as well.”

The seventh-annual run started Feb. 23 and continued down island with stops in Campbell River and the Comox Valley before winding up in Victoria yesterday.

It was an emotional run to the finish line.

At 4:30pm yesterday, the team and dozens of supporters took their final steps into Market Square in downtown Victoria. They were joined by military members and first responders running in uniform.

The group also stopped at the Afghanistan Memorial for a ceremony because, Zweng said, “the guiding ethos of Wounded Warriors Canada is to honour the fallen and then help the living.”

Zweng said Wounded Warriors raised the bar this year because they saw increased need and awareness: “We want to have as many funds in place to provide the programming for when people are ready to set forward and take that step. Whether we get there or not is not really the main thing. The main thing is that we’ve seen double the impact this year.”

She added more people than ever before know about the Wounded Warriors and its cause.

“Every car we go by, people are honking. People know who we are and what we’re doing and so we can start the conversation further into why we’re doing this, versus having to explain from the beginning, which is a huge step for the team,” Zweng said.

“People believe in what we’re doing and they’re standing with us to say that, and to come out and show their support, so it’s just been incredible.”

Funds go to Wounded Warriors Canada which offers programs on Vancouver Island, such as the Trauma Resiliency Program (TRP), COPE (Couples Overcoming PTSD Everyday), and the Service Dog Program which trains dogs and pairs them with a person with PTSD.

The latest one, Spousal Resiliency Programs, started to assist spouses in supporting their partner dealing with the effects of PTSD.

Every cent that is raised on Vancouver Island will go towards helping those who live on the island.