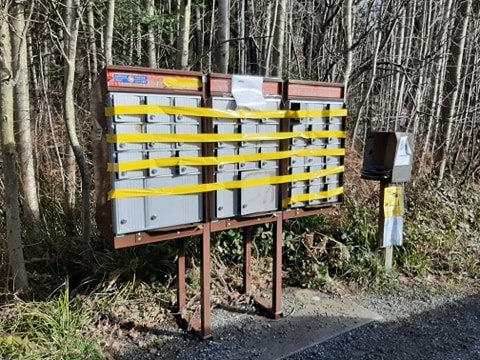 Mailboxes in rural Comox were wrapped in yellow tape after being broken into this week. (Photo supplied)

The Comox Valley is being hit by mail thieves.

A Comox woman who wishes to remain anonymous said her mailbox was among those ransacked this week.

She said this is the first time someone has gotten inside her mailbox, but she has had problems with vandalism in the past.

The woman added that almost all the mailboxes were broken into at the location in rural Comox sometime Wednesday night or early yesterday morning.

She said boxes were left “wide open” and there was mail strewn all over around them.

The woman said she feels violated.

“This is supposed to be a safe neighbourhood area and you come in there in the morning and you know that somebody has been up to no good,” she said. “You know that they’ve accessed your personal information and it’s a really horrible feeling.”

She said simple vandalism like having the mailboxes tipped over was frustrating, but “less upsetting.”

She says she feels bad for people who depend on their mail.

“Especially when it’s tax time or the beginning of the month, maybe seniors who might be waiting for cheques and all of a sudden they can’t access it and you don’t know who has your mail.”

There have been a lot more issues with break-ins and mailbox damage recently, she said.

She said she’s taking steps to protect herself.

“In the future, I’m definitely going to make sure, anything that might contain sensitive information if I have the option to have it come digitally, that’s probably a good idea for people who maybe get bank statements or things like that,” the woman said. “Perhaps having it come through secure online login might be preferable to having it come in the mail. But I guess that’s only as secure as your secure online login.”

She is also reconsidering how she gets her mail: “Realistically, I don’t want to use this kind of mailbox anymore. I’d rather pay for a mailbox somewhere else that’s in a secure location, whether it’s some of the retail malls that offer this sort of thing or Canada Post outlet where you can rent out a box and put mail forwarding on and pick up my mail there.”

That way, she said, she would “know that it’s under secure lock-and-key and I don’t have to worry about thieves at night breaking in.”

The mailboxes were wrapped in yellow tape today.

The woman said people in the neighbourhood are picking up their mail at the post office “until this is fixed.”

She added that she’s hearing the mail thieves are striking in other areas, as well.

“Ours was not just one, but one of many that seem to be happening,” the woman said.

We have reached out to the Comox Valley RCMP for details.