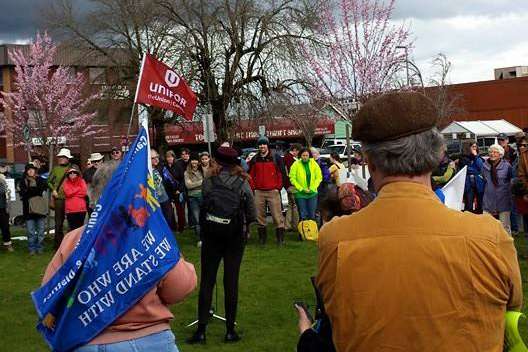 A rally opposing the Harper government’s proposed Bill C-51 took place over the weekend, just outside the Courtenay courthouse.

GOAT News caught up with one of the event’s organizers, Barb Biley. In her words, the proposed anti-terrorism bill would “basically criminalize all of us”.

She says the bill is so broad and would split Canadians apart.

It would essentially give authorities more power to detain terror suspects. It would also give new power to Canadian spy agencies.

She adds that there’s going to be an information meeting at the Native Sons Hall on April 1st for anyone interested in finding out more about Bill C-51.

DFO asks boaters to keep their distance from marine life

Dennis Bouwman taking the stage at the Simms Park

DFO asks boaters to keep their distance from marine life

Dennis Bouwman taking the stage at the Simms Park

COVID vaccines available for kids under-5 as of Tuesday

Courtenay’s blueprint to the future