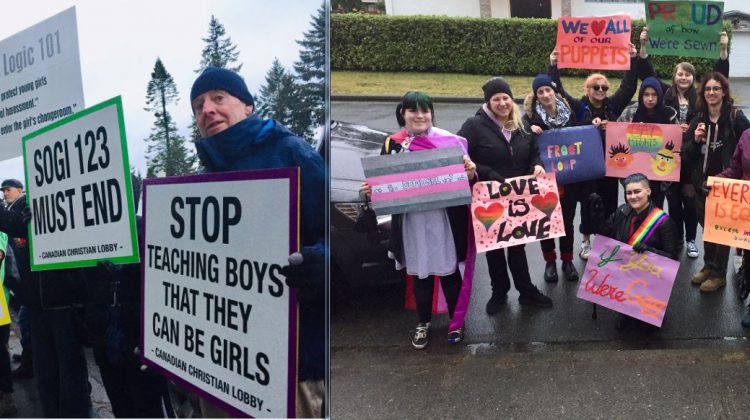 The SOGI program was the focus of a protest and counter-protest in Campbell River on Tuesday night. (Troy Landreville, Vista Radio staff)

Those for and against the SOGI 123 program are making their voices heard.

People gathered in front of the Campbell River School District offices last night for a protest and a counter-protest.

The Canadian Christian Lobby was behind the rally opposing SOGI (Sexual Orientations and Gender Identities).

He claims that School District 72 is “still not telling parents when and what SOGI 123 resources and activities are taking place at different grade levels.”

The email added that “gender secure children have been confused and that is not emotionally safe. Policies and procedures need to be put in place to protect all children. SD72 refuses to consider our concerns real.”

The group says that there are no policies or procedures in place to ensure content is taught at an age-appropriate and developmentally appropriate level.

Meanwhile, board chair Richard Franklin said he wasn’t surprised the protest organized by the Canadian Christian Lobby was happening.
“The Canadian Christian Lobby is an organization here in Campbell River, you see them in front of the hospital. They’re against abortion and women’s right to chose and they’re an organization that is against SOGI 123 in particular and this is their deeply held beliefs.”

Franklin added that SOGI was introduced to Campbell River Schools to make life better for students.

The protesters held up signs saying ‘Stop sexualizing children,’ ‘SOGI 123 must end,’ ‘Stop teaching boys that they can be girls,’ and ‘Parents need to know what, when, and how schools teach SOGI 123 resources.’

Standing a few feet away from the protesters were those who support the program.

One of them was parent Anne-Marie Long.

She said she’s a parent of four children in the district, “some of whom identify as part of the LGBTQ2S+ community.”

“My wife and I are here in solidarity,” she added.

“I know that the school board is 100 percent behind SOGI, it’s a provincial mandate, it comes from the provincial government, so protests like this are not going to have an effect of cancelling SOGI,” Long said.

She said they were there to show the students that there are adults who support them.

Long said SOGI is intended to make schools more inclusive, adding that there is a lot of misinformation and fear-mongering surrounding the program.

“I’m a parent of kids in three different schools in the school district alone, and I know what they’re being taught is in line with the B.C. Human Rights Code, and it is not what it’s being made out to be by groups that have an agenda to get rid of it.”

Long said making people deny who they are is only going to be hurtful to them.

Emmy Forbes, a Grade 12 student, was also part of the counter-protest.

She believes SOGI belongs in schools because it teaches diversity and inclusion.

“Usually, in schools, they only teach about male and female, and only the gender you are assigned with at birth, but with SOGI it’s going to teach you about transexual health and stuff like that, so it’s not just one and two, it’s a whole bunch,” she said.