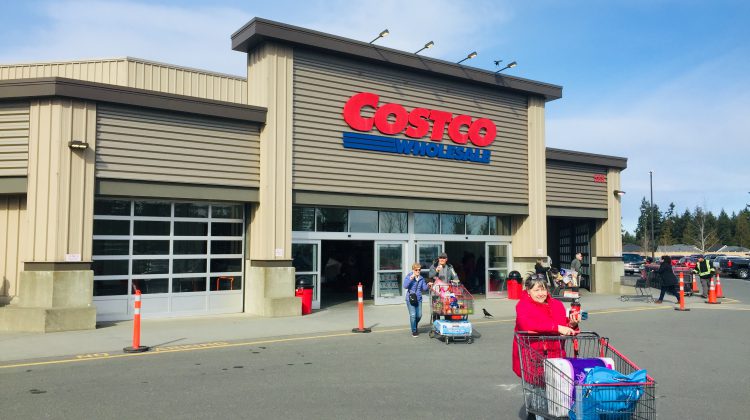 The Courtenay Costco was a busy place on Friday. (Troy Landreville, MyComoxValleyNow.com staff)

Busy, but not end-of-days busy.

That was the scene at the Courtenay Costco today, as shoppers stocked up on groceries and supplies.

Toilet paper remains a hot commodity. A few shoppers were seen leaving the store with shopping carts full of them.

Frank Baranyai said there’s lineups to get out but otherwise “it’s not too bad.”

Baranyai was told by employees that it was the busiest they’ve ever seen it.

Penelope Rokeby came out with just one package of toilet paper. She said she bought it “because I’m almost out.”

Rokeby said the toilet paper aisle was a popular spot.

“I got there when there was a small stack left,” she added. “And they were lining people up to go get however many you wanted. I’m surprised they weren’t rationing it but that’s okay.”

She also questioned the rationale behind hoarding toilet paper.

“Even four (packs).” Rokeby said. “I mean, gosh, how long is it going to take you to use that much toilet paper? Unless you have a family of 20 and they all have diarrhea.”