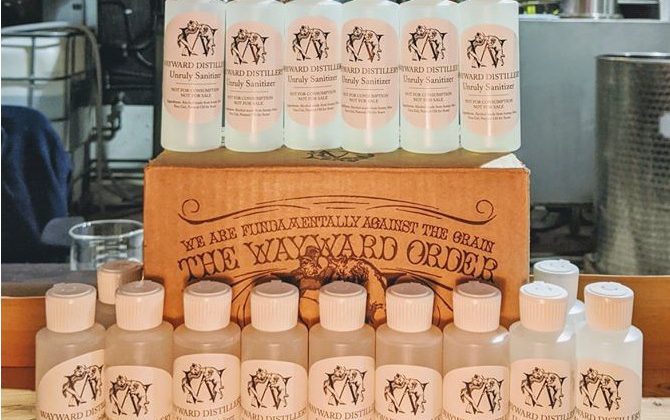 The Wayward Distillery is doing what it can to help during the COVID-19 pandemic.

The company is making hand sanitizer to support workers in the community.

Founder and CEO Dave Brimacombe says the idea sprouted after he went to the store to grab cleaning supplies for the distillery.

“I went out to get some just late last week and I realized that I couldn’t get anything. I started doing a little bit of research and I thought, ‘well if I can’t get anything I’m sure that people in the community can’t as well’.

“So we put together a little project to build some sanitizer just because we had the alcohol around and as I was putting the project together we realized the need was a lot greater than we anticipated,” says Brimacombe.

He added that once they saw how many support workers needed the cleaning supplies, they decided to create the sanitizers on a mass scale, for free.

“We thought that we would be serving our customers. As we started putting it together we realized that it wasn’t individual consumers, it was health organizations, firstresponders, fire departments, the RCMP, and healthcare workers that don’t have these things that we can give.”

He says since the distillery launched the initiative last night, it’s given out sanitizers to many different organizations.

“The first people in today were Courtenay RCMP who were looking for their spray sanitizer and hand sanitizer to deal with the front house.”

“(We’ve served)The Transition Society, we’ve got a bunch of nurses coming in that are dealing with seniors, we have the Coalition to End Homelessness coming in, we’ve got people who are critically ill coming in. It’s just been great and everyone seems so relieved.”

Brimacombe added that the plan is to keep running for as long as people need it.

“We shut down our cocktail program, we’re going to just bottle sales but we are going to stay open as safely as possible to continue this distribution and even if Wayward has to shut its doors we’re still going to do this in a private way. People can book orders with us, so if we have to shut our retail space down, we will still provide these essential services to our community.”

The distillery says it’s running low on food-grade Aloe Vera which it needs to create the sanitizers and is hoping members of the community could come forward and donate.

If you have any equipment you can donate, or would like to learn more about the Wayward Distillery’s initiative, visit its Facebook page.