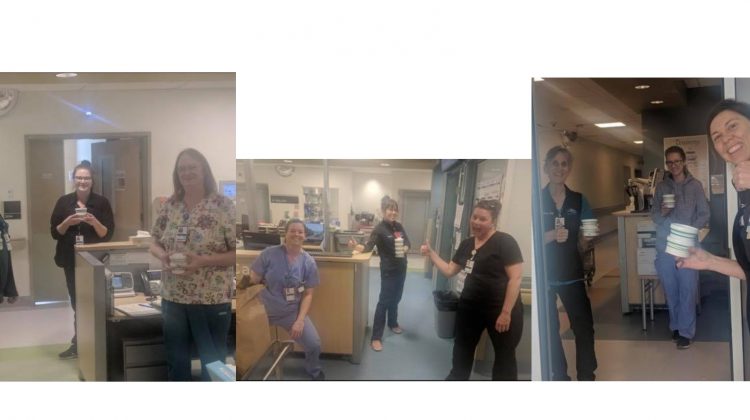 The Church Street Taphouse made and delivered over 60 bowls of chilli for staff at the Comox Valley hospital( Provided by Lisadawn Shackleford, Facebook)

With the COVID-19 pandemic keeping nurses and other healthcare workers busy, a local business wanted to say thank you.

Chris Morrison, the owner of the Church Street Taphouse, says his head chef brought up the idea to make and deliver chilli to staff at the hospital.

“It was basically our chef who took it on himself. He wanted to do something for the staff as well. He was really eager to get back in the kitchen and came in early in the morning, did a ton of prep work, and made three or four huge pots of chilli and some homemade cornbread as well.”

“He was excited to get busy again and be able to do something small that was meaningful for the staff in the hospital,” explains Morrison.

Morrison and some of the team at the restaurant, portioned the chilli into about 70 bowls for staff to enjoy and brought them to the hospital on Saturday. He says he had the chance to speak with some of the nurses, who thanked him for the gesture.

“I had a couple of cool conversations with some of the nurses as well, kinda about how they’re waiting for the storm to hit and hope that the storm never comes but they were very appreciative of that. We’re thinking about them and the sacrifices they’re making on the frontlines, all were asked is to stay home, while they’re being asked to go to work.”

He added that although the taphouse is closed for the time being, plans are in the works to reopen and help out more starting next week.

“We’ve been shut down for a couple of weeks but we’re looking at potentially starting back up in a small way next week with some deliver and takeout operations for the general public. We also received some inquiries from some other places around town that are in the healthcare field, so we’re definitely doing a follow up in the next couple of weeks with another institution.”