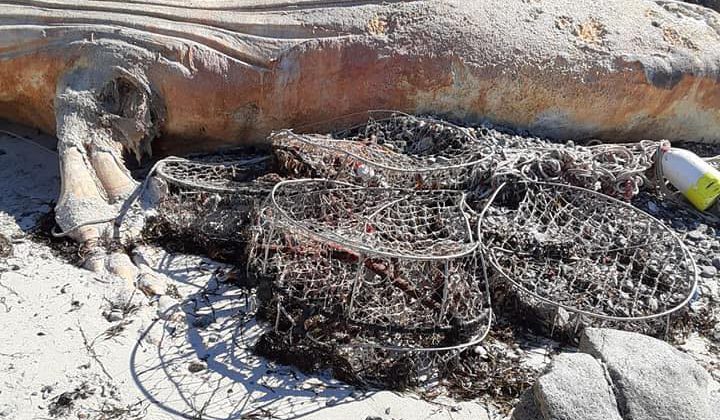 A juvenile Humpback whale was found dead on Vancouver Island West Coast after being entangled in crab traps (Provided by Tracey Gosselin, Facebook)

It’s a sad ending for a juvenile Humpback whale off the west coast of Vancouver Island.

The dead and decaying animal was spotted entangled in crab traps on a remote beach near Kyuquot by some kayakers.

Jackie Hildering, a Humpback researcher with the Marine Education & Research Society, says it’s heartbreaking to see a Humpback wash up on shore from entanglement.

“This whale was never even reported even to be entangled. It makes very clear that this death would not have been a fast one. The biggest problem is finding the whale’s back and what would have happened to this whale is that it couldn’t have moved properly, it couldn’t have fed properly and there would very likely be complications from infection as well.”

Hildering says the whale will serve as a teaching point to showcase how important tackling the issue of entanglement is.

“Most often the reason the story doesn’t get told and where there is the opportunity to learn from these entanglements is that dead whales sink. Showing these very compelling gruesome photos is that the return of humpbacks is such a sudden thing on our coast. We as coastal British Columbians have a responsibility to understand the threats of entanglement and our research.”

“We can’t count the number of whales that die but through looking at scarring we know that 50 per cent of them are survivors, so that certainly gives an indicator of how severe of a risk this is.”

She added that while the animal won’t be showcased like a similar one that washed up on shore near White Rock, it will serve as a reminder to the dangers of how entanglement can affect whales.

Hildering says there’s a lot of romantic notions out in the world about how people can save whales that are stuck, but she says the photos paint a clear picture of just how complicated entanglements actually are.

To learn more about how to help whales, or to report any mammals suffering from entanglement, visit howtosaveawhale.org or call 1-800-465-4336.