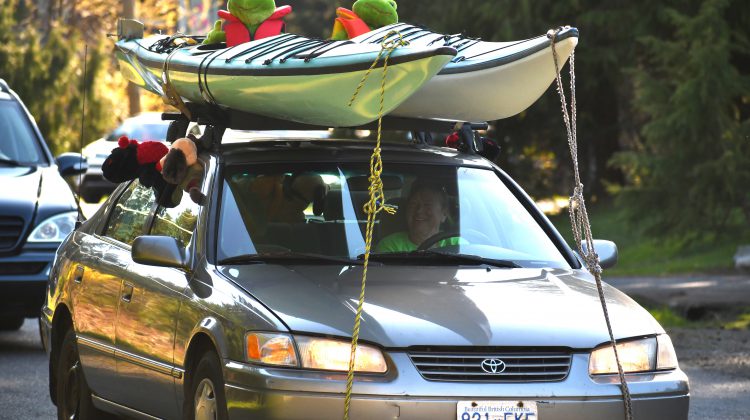 Teachers and staff from Huband Park Elementary decorated their cars and drove past students during a parade on Thursday night. (Supplied by Mary Lee, Comox Valley Schools)

The Huband Has Heart Teacher Parade is leaving lasting memories.

Staff and students from Courtenay’s Huband Elementary haven’t seen each other for five weeks.

They reunited from a safe distance on Thursday.

Teachers and staff drove past students in a 30-car convoy to show their solidarity and support during the pandemic.

Acting principal Gracie MacDonald said it was an emotional experience.

“There was a lot of crying. There were a lot of happy tears. I could see parents crying, too. And the kids, just their faces, that startled look when they see you and they want to run to the car. They’re halfway between smiling and tearing up a little bit,” MacDonald said.

“It was beautiful and difficult.”

MacDonald said while teachers have been talking to the students both digitally and on the phone, “it doesn’t quite feel the same as seeing their faces.”

That’s why teacher Bobbie Carter came up with the idea of a wave parade.

MacDonald said they let the parents know what route they were going to take, starting at Virginia Drive.

“And then we just drove around the neighbourhood with our cars decorated with silly hats along with our dogs, socially distancing in our own cars, and we also had a contingent of bicyclists – we had about 10 staff who started out on bikes,” MacDonald said.

The parade was led by a sheriff’s van with its lights activated and siren flashing.

Students and their parents stood at the end of their driveways to greet the convoy.

“They made cute little signs that read ‘we miss you’ and ‘hello to (teacher) Mr. Fraser.’ It was sweet. And people who have no big connection to our school, so retired adults and other people in the neighbourhoods, sat out and waved, too which is pretty amazing. It just felt like a bit of a celebration.”