Stay away from the Puntledge River 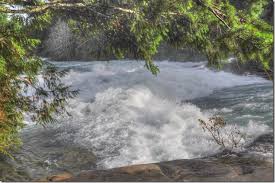 BC Hydro is spilling water from Comox dam and that will continue likely through this week. The public should be cautious around the Puntledge River.

BC Hydro, as planned, shut down the generating station this morning for the bi-annual maintenance work. The facility will back online on April 16.

The operational plan was to provide minimum fish habitat flows during the shutdown and capture some water in the reservoir for storage. Some storms were forecasted this past weekend and today, though the rainfall and subsequent water inflows into the reservoir have been high. Total precipitation in the upper the Comox Lake watershed hit about 85 mm over a 24 hour period from 3:00 pm Saturday to 3:00 Sunday. On Sunday, the reservoir level increased by about 0.6 of a metre. It is currently at 135.05 metres. Water free-spills over the dam at 135.3 metres.

With no water coming out of the generating station for the next few weeks, all the water is being passed below the Puntledge Diversion dam and down the Barber’s Hole, Nymph Falls, and Stotan Falls area of the river. Minimum fish habitat flows in this area are normally around 6 m3/s. The river flow is currently at about 45 m3/s and BC Hydro may increase the flow later today based on the water abundance conditions.

Overnight, BC Hydro increased the river flow to about 100 m3/s briefly before backing off early this morning.

BC Hydro is providing a public safety advisory for people to be cautious around the Puntledge River through this week as BC Hydro manages the reservoir level. River flows in the Stotan Falls area of the river are dangerous and the public should stay away from that section of the river. Warning signs have been placed along the river.

With the near record low snowpack for this time of year, BC Hydro plans to hold the reservoir near the full level into early June. From there, with the snowpack likely gone by then, water conservation measure will be put in place to manage through a potentially low water supply situation this summer.