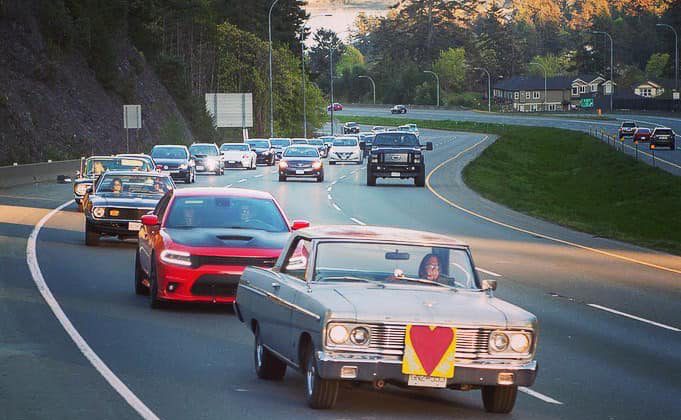 Photo of one of the Cars4Covid cruises, (Provided by Cars4Covid, Facebook)

It first started back in April as a way to say thank you to all frontline workers during the pandemic and so far, $2450 has been raised.

The group takes part in organized cruises throughout different communities on Vancouver Island.

Erik Vierstra is the coordinator for the Comox Valley section of the group, which also has organizers in Nanaimo, Victoria, and even parts of the Lower Mainland.

He says the support from the Comox Valley community has been amazing.

“We’ve been waved at a few times going through the valley here but I think the community has taken it pretty well, along the lines of we’re not just a group of people cruising around. We’re actually getting a decent amount of people out, donations and support and stuff like that.”

He added that when it comes to sales of those ‘Cars4Covid’ stickers, the team has already ordered multiple batches.

“I think we’re on our fourth batch of stickers, and we do anywhere from 200-300 decals per batch, so that’s pretty good when it comes to how many we’ve sold for raising money.”

Vierstra says the biggest takeaway he wants people to have is that the cruises are being done safely and they are a great way to help raise money for COVID-19 research.

One of the donations came from Langford’s mayor, and Vierstra would love to see the Comox Valley and other communities get on board.

“Langford Mayor Stewart Young definitely stepped up and said, ‘Here you go.’ Let’s see if the Comox mayor, the Courtenay mayor, the Nanaimo mayor… let’s get all the communities to donate and do this.”

The next cruise in the Comox Valley is planned for May 16th.

To learn more about the Cars4Covid group, or to donate, visit its Facebook page.