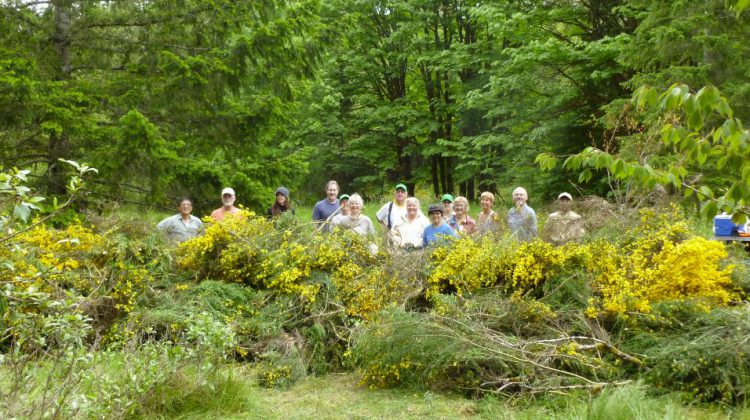 The Comox Valley Broombusters are inviting you to help take out scotch broom in Cumberland this weekend.

The invasive plant removal party is happening Saturday from 9:30am to noon at the No. 1 Japanese Town Historic Site in Coal Creek Historic Park.

You should also bring your own loppers.

The group will meet at the parking area at the historic site off Comox Lake Road, marked by the red “No. 1 Japanese Town Historic Site” sign.

Broombusters coordinator Bev Agur said scotch broom is a pest for a few reasons: “It’s an incredibly invasive plant. It just takes over so native plants then just get choked out, as well. It has a really high oil content so it’s very flammable, so it’s a fire risk. And aside from the yellow flowers, after that it’s pretty ugly.”

She added that you can’t kill it because you just spread the seeds around.

“It’s not good to have at all; there are no redeeming features at all. Even bees don’t like it,” Agur said.

The best time to cut scotch broom is when it’s in bloom in late April through early June.

Cut at ground level, or below if possible, so the drought stressed plants will die in the summer’s heat.

Find out more about removing broom and Cumberland’s efforts to remove invasive species.

It was first introduced to southern Vancouver Island in the 1850s, and now grows prolifically throughout southwestern British Columbia. Broom is most often found in open areas such as meadows, forest clearings, roadsides and hydro corridors.

It changes the chemistry of the soil around it so that other plants can’t grow there.