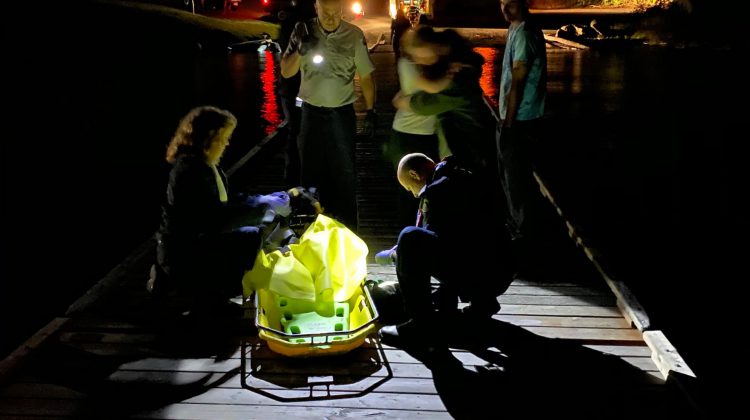 At about 9:30pm, firefighters and RCMP officers hiked in darkness to find four girls and one boy roughly between the ages of 13 and 15. (Supplied by Rocky Swanson)

A group of teens can thank emergency responders for getting them out of a sticky situation in Powell River.

Powell River Fire Rescue deputy chief Rocky Swanson said firefighters and the Powell River RCMP got a call from North Island dispatch, about one or more individuals stuck on “a very high cliff” on the east side of Mowat Bay Park.

“That area ranges from low slope type bluffs that kids like to jump off of into the water into extremely dangerous elevations – 80 to 100 feet vertical kind of slopes,” Swanson said.

At about 9:30pm, Swanson said firefighters and RCMP officers hiked “in total darkness” to find four girls and one boy, all roughly between the ages of 13 and 15. 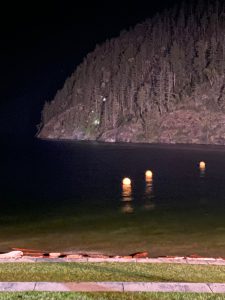 The lights on the cliff are those of Powell River Fire Rescue rope teams moving up the mountain. (Supplied by Rocky Swanson)

Swanson says what followed was one of the most highly technical rescues he’s seen in 25 years:

“The only way to get them down in absolute total darkness was using rope rescue and basket stretchers to lower them almost vertically straight down the side of a cliff into a waiting RCMP Zodiak,” Swanson said. “The BC Ambulance Service was also involved, they were on the shore along with myself and incident command and we were receiving the (patients) as they came along.”

While injuries were minor, Swanson said there was “definitely extreme distress to put it mildly.”

“I could hear the screams of the children from across the bay, quite clearly,” he said.

The type of terrain made the situation even more dangerous, Swanson added: “(It’s) that dry moss that you get on bluffs and it’s extremely slippery. Had those kids tried to come down on their own, there’s a very high probability that they would have slipped and at least suffered very serious injuries. They were already scraped and bruised. Luckily they were able to stay put and calm each other down a little bit and our teams were able to conduct a rescue.”

Swanson is cautioning others about the dangers of hiking in the area, especially after dark: “I just think the public needs to realize that, that area, although it is perfectly acceptable to go hiking there in the daytime, kids shouldn’t be left out there in the dark, at all. It’s extremely dangerous. So from the RCMP and ourselves, we’re asking the public to be very, very careful up there.”

He added that you should always carry cellphones and flashlights if you decide to go hiking.

“And for the love of God, no (kids) should be on those rocks without supervision,” Swanson stressed. “It’s just too dangerous. It puts the RCMP, the search-and-rescue technicians, the Powell River firefighters and everybody else at risk. I’m glad all the kids are okay and your heart goes out to them when they’re that scared, but lesson learned, I would think.”