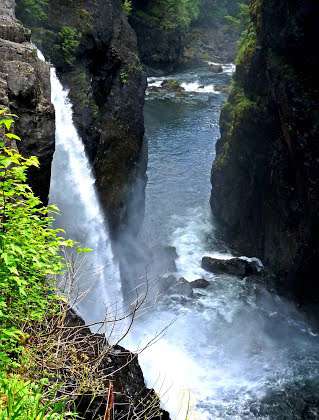 BC Hydro is providing a public safety notice for the higher water flows that will be in place down Falls Canyon this week. Beginning Monday evening, the public is advised to stay away from the Campbell River, above Elk Falls, while the high flows are in place.

The weekend storm and the next wave of precipitation this evening is providing a lot rain and subsequent run-off into the Campbell River system reservoirs. Rainfall amounts in the upper watershed hit about 80 mm over the weekend. There may have also been some modest snowmelt.

On Sunday, the daily average water inflow into the Upper Campbell Reservoir/Buttle Lake was 533 cubic metres per second (m3/s). That flow rate is enough to fill an Olympic-sized swimming pool in five seconds. For the month of March, that was the fourth highest daily inflow amount in about 50 years of record. About 350 m3/s is forecasted for today.

BC Hydro’s water supply year goes from October to September. To date for this supply year, the water inflows into the Campbell River system have been the second wettest on record. Looking ahead, with the near record low snowpack that may be depleted by the end of May, BC Hydro has been keeping the upper reservoirs a bit higher than normal to capture as much water as possible. This is to manage through a potentially dry summer.

The Upper Campbell Reservoir has increased by about a metre over the weekend, and is currently at 219.9 metres; 220.5 metres is considered full.

BC Hydro increased the John Hart generating station output from two-thirds of capacity to about three-quarters of capacity on Friday, and on Sunday, increased it to full capacity.

The minimum fish habitat flow down Elk Falls Canyon is 4 m3/s. Beginning Monday evening, the water release below the John Hart dam will increase to about 40 m3/s, with potential to go up to 80 m3/s this week depending on inflows and to control upstream reservoir elevations. BC Hydro is spilling water through the system. The spill is expected to last into the weekend.