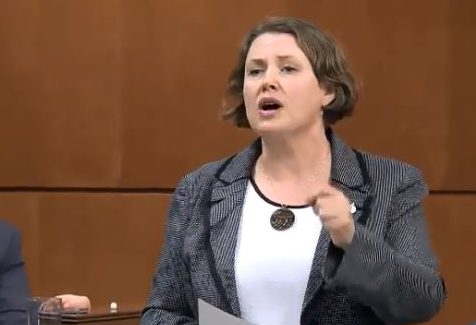 Blaney recently wrote to Minister of Veterans Affairs, Lawrence Macauley, calling for the government to eliminate the existing backlog, “and ensure all of Canada’s veterans get the support they need in a timely fashion.”

Blaney, who is the federal NDP’s Critic for Veterans Affairs, pointed out that in 2018, an NDP motion received unanimous support to automatically carry forward unspent dollars for veterans to the next fiscal year.

“Not only did this not happen, the total money budgeted went down $127 million and at the end of the fiscal year, there was still over $100 million sitting on the table,” Blaney said during Question Period in January. “This is happening while veterans are struggling every day to get their needs met.”

Blaney now says there remains a long wait list of veterans who have applied for supports that they’re not getting.

“The backlog is now projected at 44,000 veterans who are still waiting in some cases up to two years to find out about their benefits. We’re just encouraging Veterans Affairs to look at this; to take that 44,000 backlog and get people the supports they need as quickly as possible and determine eligibility later on through an audit.”

In the letter, Blaney said that “we were told in the Standing Committee on Veterans Affairs (ACVA) by department officials on March 10, that a plan to eliminate the backlog would be available within 30 days, and we have yet to receive that plan.”

“We have also been told multiple times in ACVA that automatic or artificial intelligence-supported approvals for specific disabilities, such as tinnitus, are going to be implemented soon. ACVA also heard that VAC is looking at the way our allies treat the disabilities of veterans, in some cases automatically approving common injuries linked with certain roles in the military, and seeing if such a system can be implemented in Canada.”

She said in light of the government’s response to COVID-19, “it is now obvious that automatic approvals followed by audits are an incredibly efficient way of getting support to people in need.”

A number of veterans advocacy organizations are calling for this to apply to Canada’s veterans, Blaney said.

“I see no insurmountable obstacle impeding VAC from applying this model to VAC’s disability benefit application process and getting Canadian veterans the support they need in a fair and expedient fashion,” she added.