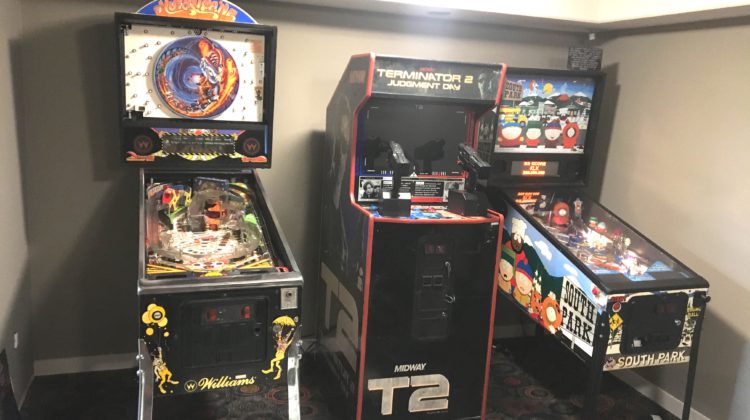 Some of Erik Aase's lineup of video games in his home. (Supplied by Erik Aase)

While PacMan is marking a milestone, he isn’t among the favourites of a vintage arcade machine collector.

Courtenay realtor Erik Aase said he started collecting the machines about five years ago after going through what he calls “a midlife crisis.”

He compares his hobby to owning a classic car. “They always require maintenance and money. I buy them, I fix ’em up, I sell a bunch of them, so I can have my stuff.”

The hobby is getting more expensive. “The days of getting stuff cheap is over, because retro gaming is cool now. Nostalgia’s a powerful thing. There are a bunch of guys my age that want to have their own stuff in the house. Unfortunately, most of the stuff has gone to the United States. You can’t really find it anymore. The dedicated stuff from the ’80s, it’s very hard to find nowadays.”

His earliest arcade memory is 1978, playing Gorgar, the first pinball game with speech.

Aase said his favourite game remains Defender, which dates back to when he started playing it back in 1981.

“I was never really a PacMan fan,” Aase said. “It just seemed too simplistic to me. To me, the difference between PacMan and defender is light years. One’s really complicated, one’s a lot easier. Not to say PacMan doesn’t get hard.. I don’t know. Why do some people drive a Ford and some people drive a Chevy? It’s just different, right?”

He says he “has a bunch” of machines at his house, and a few in his storage locker. He says he’s working on finishing his ‘man-cave’ and will be keeping few of his games there.

PacMan is among the games he owns, sort of: “I have a sit down cocktail (game). That has 60 games in one. That’s got Ms. PacMan, PacMan and 58 other games. Do I have a dedicated PacMan? No.”