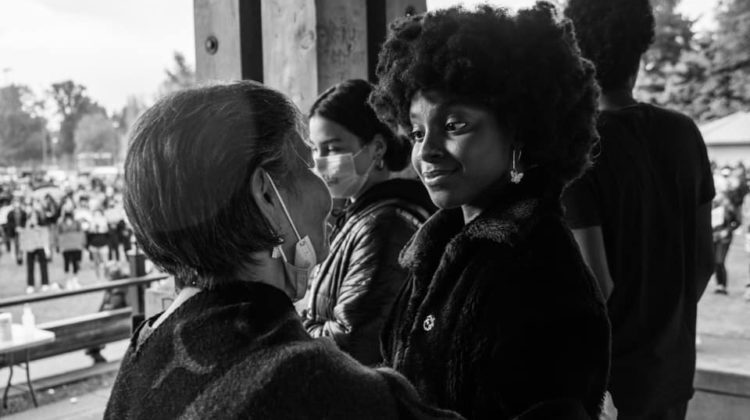 The victim of an alleged racist incident in downtown Courtenay is speaking out.

Daruna Jean says she was called a racial slur by a patron at the Cornerstone Taphouse on June 3rd.

Ironically, this happened while she was helping to plan last Friday’s Black Live Matters protest at Simms Millennium Park.

The 19-year-old student said a man started being rude to one of the servers.

“He started calling her names, like really bad things, he started telling that lady,” Jean said.

The man was asked to leave and on his way out, Jean said he stared at her “like he was about to tell me something.”

Jean says that during their exchange the man then called her a racial slur.

She added that the incident left her shaken.

“I was not part of it and he just went straight up to me and said that,” Jean said. “And of course I got really upset.”

She added, “What upset me more, is not what the man said. What affected me the most, what made me angry the most, was no one did anything.”

The timing of the incident also hit home. “Do you know how ironic that is? I didn’t do (the protest) because of what happened. I was already planning it because of all that has happened in the states, and we wanted to show support to my black community. And while I was sitting there, getting stuff ready, this happened to me. I had to live it in real life.”

In a Facebook post on Sunday, Jean clarified that the protest was not organized because of the incident at the Cornerstone,  but to “support of all the innocent lives that have been taken by police brutality and all the injustice to our indigenous people.”

“Together we can manage for incidents like this to never happen to anyone else again, that was my goal when I shared my story. NOT FOR HATE, NOT TO DEGRADE THE RESTAURANT or anyone who was involved,” Jean added in the post.

“From now on let’s take more time to spread love , let’s care more about each other because at the end of the day WE ARE ALL ONE!”

“A 37-year old man was arrested by police for mischief, causing a disturbance, and breach of probation,” Terragni added.

On its Facebook page, the Cornerstone posted that “during the racist incident, a client was not safe in our establishment.”

“Even with our best intentions and our complete commitment to inclusivity we were unable to stop the racist attack. We are devastated by this. We wish our customer had not been racially targeted because of the colour of her skin. We empathize with the realities that BIPOC and black people face this fear everyday and we are sad our establishment became a place for this racism to express itself and cause harm to the young black woman. Know that we will never accept racism on our premises. We know that Black Lives Matter.”

The post went on to say that the Cornerstone “will continue to ensure to the best of our ability that Cornerstone is a safe space and we will always stand with our Black customers in their fight for equality. We condemn all forms of violence and continue to strive for a world where all people are equal and safe no matter if they are enjoying the ambiance of our restaurant or simply out in public living their lives.”