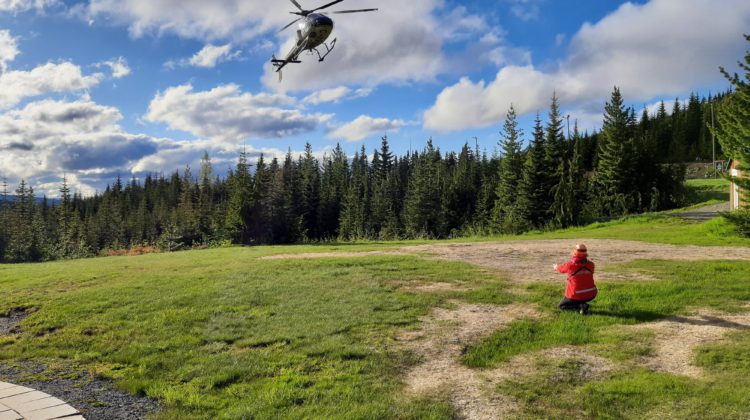 A pair of hikers from Victoria can count themselves lucky today.

The women in their early 20s and their dog were rescued by helicopter by Comox Valley Ground Search and Rescue members, in what turned out to be a two-day operation at Strathcona Provincial Park.

Comox Valley SAR president, Paul Berry, said around dinnertime last night, they received a call from the emergency coordination centre in Victoria that the hikers had become disorientated and were “cliffed out” on Mount Albert Edward.

“We assembled two teams, one that we intended to insert by helicopter, and the other on the ground,” Berry said.

“(There were) many storm cells coming in and out and visibility was poor,” he added.

The helicopter team landed in close proximity to the hikers. From there, the SAR members hiked to the women and dog, who were stranded on a steep snow slope.

“At that point we had to direct additional equipment up to the team to be able to conduct a rope rescue and lower them down to safer ground,” Berry explained. “So we brought in ropes and harnesses. A harness for the dog as well as the subjects, and helmets, so we could ensure their safety.”

Once in a safer location, they were able to hike towards their camp at Circlet Lake.

“One of our other teams had located their camp at Circlet Lake and re-positioned their equipment in a spot where we had hoped that the helicopter would be able to get in, but by about 8:00pm last night, the weather had closed in significantly,” Berry said.

The SAR members and hikers stayed on the mountain overnight before airlifting them out at first light this morning.

The hikers and their dog were very cold and wet but otherwise relatively uninjured. Berry said one of the hikers suffered a head injury from a “fairly significant fall.”

Berry said the SAR team included some experienced members, including a physician. He added that a “skilled pilot” from Grizzly helicopters “was tenacious enough to get our team in.”

“Had we not been able to get a team to fly in close to them, they would have been waiting many, many more hours for teams to hike in that distance to get to them overnight.”

The hikers were “really unfamiliar with the environment in the alpine, in the Strathcona park at this time of year,” Berry said.

“In the mountains, it is still very much winter and they were not prepared to be caught in an exposed alpine area in winter conditions overnight.”