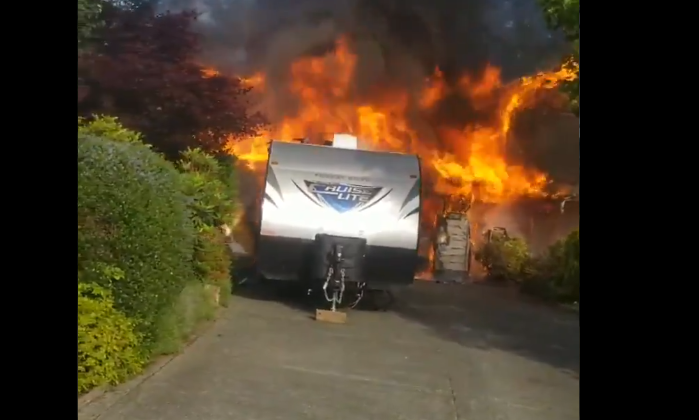 The Campbell River Fire department is reporting that all occupants of a fully involved structure fire were able to get out without injury.

When crews arrived on scene, the front of the house was completely enveloped in flames with the fire growing rapidly.

“Crews from both stations responded with a total of five apparatus and some support vehicles,” says Deputy Fire Chief Kelly Bellefleur.

Bellefleur says working smoke alarms alerted those inside the home of the fire, allowing them and their pets to escape unharmed.

CR fire respond to structure fire on Murray Pl tonight. All occupants were able to get out without injury. pic.twitter.com/TTdIlYgkcX

A video on the Campbell River Fire Twitter feed shows the home engulfed by flames.

Power in the area was turned off briefly while BC Hydro isolated electricity to improve safety for firefighters.

“While there was extensive damage to the home, crews were able to recover some personal items for the family,” Bellefleur says.

He adds that there was also minor damage to the two homes next door and to an RV in the driveway.

Initial reports suggest the fire started in the garage, however the investigation is still underway.