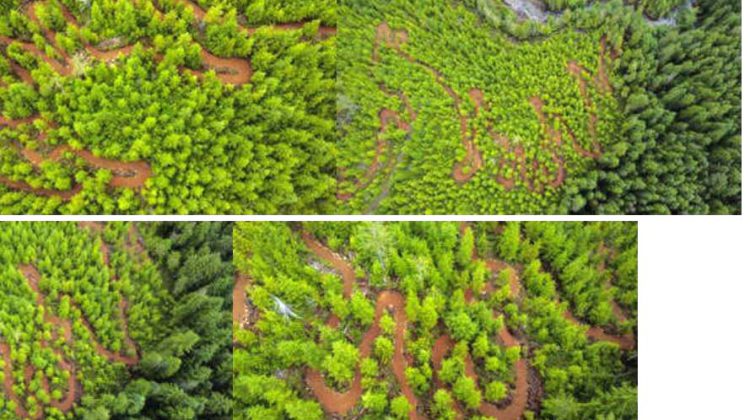 Aerial view of the new trail in Cumberland that is opening tomorrow (June 26th). (Supplied by the United Riders of Cumberland)

A brand-new hiking trail is opening in Cumberland.

The United Riders of Cumberland (UROC) completed the five-kilometre climbing (ascent only) trail, which allows users to access the upper part of the trail network without having to travel on resource roads.

Tomorrow (June 26th) marks the official opening of the trail which starts at the exit of Broadway and winds its way up and across Perseverance Creek, with an elevation gain of 500 metres and roughly 89 switchbacks.

The official name of the new trail will be Sobo No Michi, a Japanese name which translates to Grandmothers Path/Trail.

Sobo means grandmother and “No Michi” can also mean “philosopher’s way”, our path through life.

The network’s popularity with both local trail users and visitors continues to grow, with an counted figure of 132,000 trail visits in 2019.

UROC executive director, Dougal Browne, said this addition marks the beginning of a new era for the trail system.

“It’s super exciting because this climbing trail allows us to get into parts of the network that were not so accessible before,” Browne said. “And also, it takes the riders and walkers and multi-user groups off the roads to get up to elevation. It means in the future, we’re going to be able to build more exciting trails and exciting aspects to the trail network from having that new corridor up the mountain, so to speak.”

Browne said the trail was years in the making.

“There was a couple of years in preparation and finding the funding, which we got from the Rural Dividend Fund and there was pretty much a year of construction. We had a full-time contract excavator in there and he built the trail system from bottom to nearly 700 metres, elevation.”

There were “literally hundreds of hours of volunteer work, as well,” Browne explained.

“We had a couple of bridges to put in and a lot of tidying up and cleaning up… it was a big project,” Browne said. “It’s quite a combination of things.”

“This trail is not a difficult trail to negotiate. It’s called a blue square trail which is very doable. You can ride up it pretty much with great ease. You can certainly walk up it. It’s very much a family environment. The whole point of the trail was to give multi-user groups and all aspects of mountain bike riders the opportunity to get further into the trail network.”

There are lots of switchbacks, he added, and is a “wide, comfortable trail to use.”

There are plenty of viewpoints, too, including the Comox Valley, and Texada, Lasqueti, Denman, and Hornby Islands.

Erik Holbek, UROC Director of Trails, said “the Cumberland trail network is an incredible recreation asset for locals, with users of all ages enjoying access to the trails and surrounding forests.”

“At the same time, we recognize that Cumberland has a strong reputation as a destination for outdoor recreation tourism,” Holbek said.

“We hope to further develop the quality of the trail network for both locals and visitors with this project.”

The project was made possible by a grant from the BC Rural Dividend program, awarded to UROC in 2018.

The UROC is a local not for profit society who in 2015 negotiated a land access agreement to manage the trail network.

To become a member and support the network or learn more about UROC, click here.