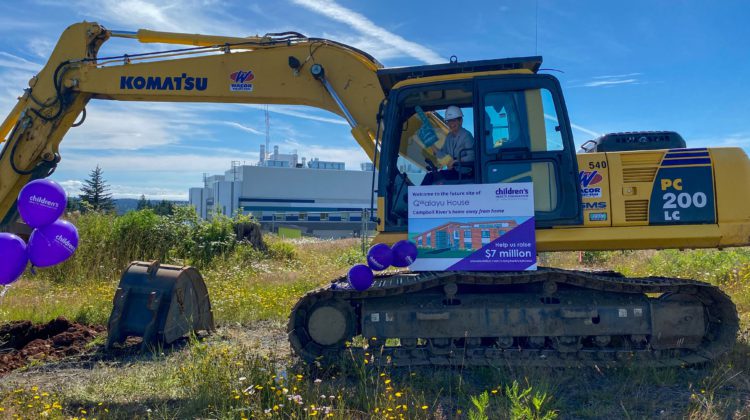 Children’s Health Foundation of Vancouver Island officially broke ground on its new ‘home away from home’ in Campbell River.

With ten bedrooms, Q̓ʷalayu House will welcome families and expectant mothers who need a place to stay while accessing the North Island Hospital next door and nearby health care services.

It’s inspired by the success of Jeneece Place, a home for families to stay while their children received health care in Victoria.

As families, health care providers, and community groups from northern Vancouver Island saw the impact the home had, they stepped forward voicing a need to expand this model to Campbell River.

“I am thrilled that the vision this community had years ago to build a welcoming, culturally safe, and nurturing environment for families to stay while their children are accessing health care, is finally becoming a reality,” says Children’s Health Foundation CEO Veronica Carroll. “This home will be such a positive support system for rural and remote families who need to travel great distances to access care, and its impact will be felt for generations to come.”

The name Q̓ʷalayu House mixes both English and the traditional language of the home’s host community on the shared territories of the We Wai Kai and Wei Wai Kum First Nations.

It’s an endearing term used by Elders when they speak of babies and children as their reason for being.

First Nations groups, Elders, and a traditional language group were involved in the naming process.

The project received a significant boost after a capital campaign kicked off in September of last year and $3 million in core funding was donated anonymously.

A large parcel of land adjacent to the North Island Hospital was also provided by Island Health to Children’s Health Foundation as a long-term license.

The foundation says it’s been working with a dedicated committee and dozens of community partners to help make this project a reality.

While ground has now officially been broken, the foundation is continuing to raise funds to meet its $7 million goal, which will cover costs to build and fully equip the home, as well as fund the first five years of operating costs.

For more information about the Q̓ʷalayu House project and campaign, click here.