Royston dog on mend after being hit in head with pipe 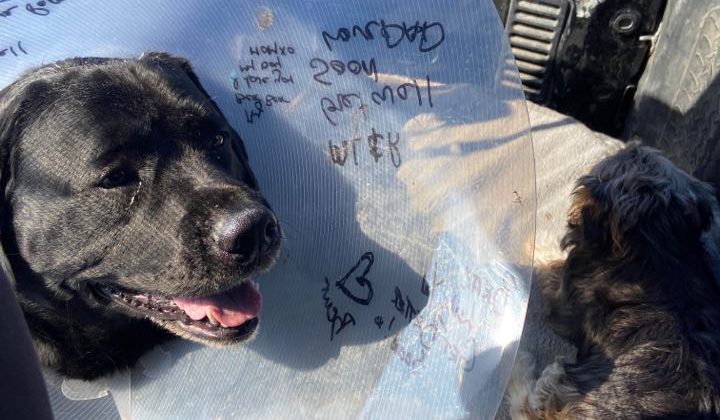 Seanna McLeod’s seven-year-old black lab, Bear, is recovering from the attack in Royston on Saturday afternoon. (Supplied by Seanna McLeod)

A Vancouver Island woman wants to know who hit her dog with a pipe.

Seanna McLeod’s seven-year-old Mastiff lab, Bear, is recovering from the attack in Royston on Saturday afternoon.

She says they almost lost their dog, which suffered a gash on the top of his head.

McLeod explained that she was out helping a friend renovate her home when it happened.

She said while she was away, Bear went on a stroll around the property, which is usually no problem she says because he is quite well known in the community.

She says since it happened across from Roy’s Towne Pub, witnesses have come forward.

“Now that we have a little bit more information and we have descriptions of two different men on bikes, hopefully the police can get some footage from the Mini-Mart and then a different angle from the pub so we can see the person before the gap (in video footage) happened or after the gap happened in the camera,” McLeod said.

Bear is over 100 pounds and McLeod said after he was hit, you could see marks on the ground where he slid.

She thinks the first blow was a “golf swing to the side of his head” followed by “the full downswing on the top of his head.”

She added, “The bartender at the pub heard him yelp. There was no aggressive barking before the attack, there was nothing. He just gave this howl as he was hit. It was just gross.”

McLeod is also asking anyone who believed they saw something to come forward to the RCMP.

“People wouldn’t have first thought that was different if they saw him run from the back of the property but in hindsight, they might realize that how he ran from the back of the property, he was staggering and now they might think back. So we’re really hoping that somebody who does know Bear at first didn’t think there was anything wrong, and now is going, ‘Oh wait a minute, I saw something.’”