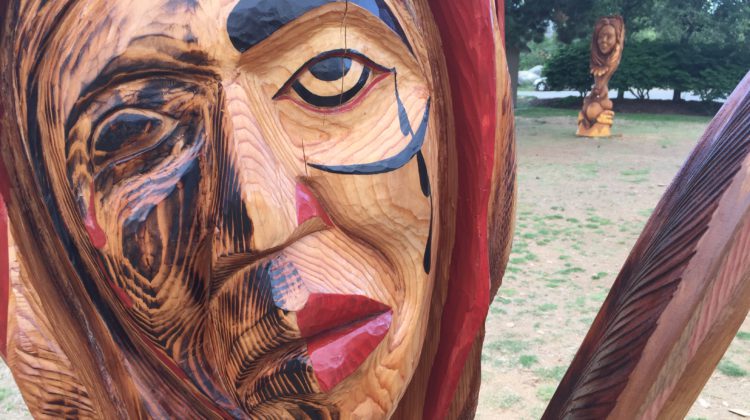 There’s an empty feeling for many when they stroll through Campbell River’s Frank James Park these days.

Usually this time of year, it’s filled with wooden works of art, courtesy of the Transformations on the Shore carving competition.

However, last month’s event was axed due to the pandemic.

It’s the first time in the event’s 24-year history that it’s been cancelled.

Organizers hope to be back next June and are inviting professional, semi-professional, amateur, and novice carvers to take part.

Last year, artists from as far away as Alberta created 22 carvings that were on display all summer long in the park next to the Rotary Seawalk.

In the fall of 2019, each of the carvings were trucked to 19 sponsors around town that ‘adopted’ them.

Don Daniels is the president of the Campbell River Shoreline Arts Society, which puts on the competition.

Daniels says the decision to cancel public events in and around Campbell River came in early March, in the early days of the outbreak.

“We are in touch with the carvers, the beginning of January, and we just had to contact all of the carvers when we started getting the news about the virus situation,” he added. “With the health requirements, like everybody else in the city, we had to put a stop to the event this year.”

If there’s a silver lining, it’s that the decision to cancel came before out-of-towners made plans to travel all the way to Campbell River.

“Earlier the better, because carvers coming in have to make travel (arrangements) and make plans, and a number of the carvers come for the event on their vacation,” Daniels said. “So it’s just the time difference, even when it came down to notifying sponsors, with businesses being shut down early, it was the green light to cancel the event for this year.”

Daniels said while seeing the park empty all summer is a big disappointment, it doesn’t compare to what local businesses have been going through over the past few months.

“Because we rely on a lot of donations, some of the businesses were completely shut down,” he explained.

“Proceeding forward, it would be quite difficult going to motels and hotels, asking for donations of rooms for carvers, just with the current situation. We are thoroughly disappointed that the event is not happening this year, but we are coming back full force for next June.”

Depending on the COVID situation, next year is shaping up to be a great competition, according to Daniels. “We are working with the forest companies – Western Forest Products and Mosaic – and we have enquiries already from a carver coming in from Russia maybe. So it takes planning for most of the year, and the event will go on next year, hopefully if we get rid of this virus situation.”