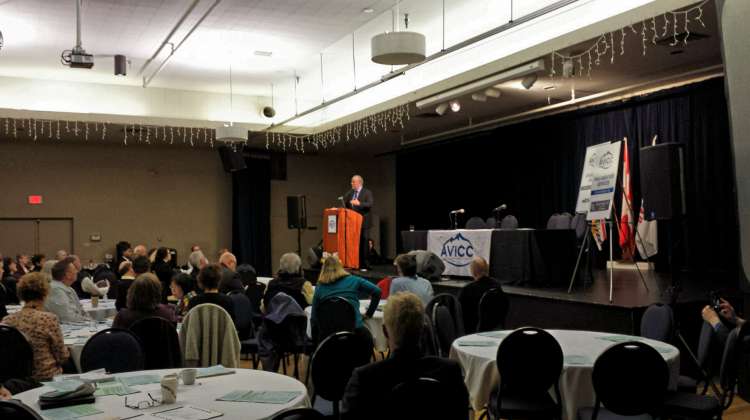 This weekend, the city of Courtenay hosted the 2015 AVICC convention at the Florence Filberg Centre.

The AVICC is the Association of Vancouver Island and Coastal Communities.

A multitude of topics were discussed, including BC Ferries, the Coastal Ferry Act and others affecting the Island and coastal communities.

The auditor general for local government was brought up. Back in March, Basia Ruta was fired from her post after conducting 3 audits in the 2 years she was on the job.

Those audits cost a whopping $5.2 million!

Goat News spoke with BC NDP leader John Horgan at the tail end of the convention to get his thoughts on this situation.

Horgan mentions one of the other hot topics: BC Ferries.

Horgan says the first course of action is to repeal the Coastal Ferry Act, and then work with communities to find the best best way to move forward.

AVICC Director Colin Palmer shared his thoughts on this as well.

To kick off the weekend affair, a rally was held on Friday regarding BC Ferries. We were able to touch base with an Islander who attended the rally, Carla Neal.

She says that the ferries are part of the highway system.

Other individuals that attended the weekend conference include Courtenay mayor Larry Jangula and Comox mayor Paul Ives, among others.

The AVICC also brought up BC’s preparedness when it comes to oil spills. This came after last week’s oil spill in the waters of Vancouver’s English Bay.

In response, the AVICC passed an emergency resolution calling for an independent audit of the current state of oil spill preparedness. Sechelt district council drafted the motion and Sechelt’s mayor says with all the damage a major oil spill could do, the province should take immediate action.

The Association also passed a resolution objecting to the expansion of oil tanker traffic along BC’s coast. The Coast Guard is defending its response, saying it was at the spill site assessing what needed to be done within an hour. But the AVICC says the containment needed to be handled better.