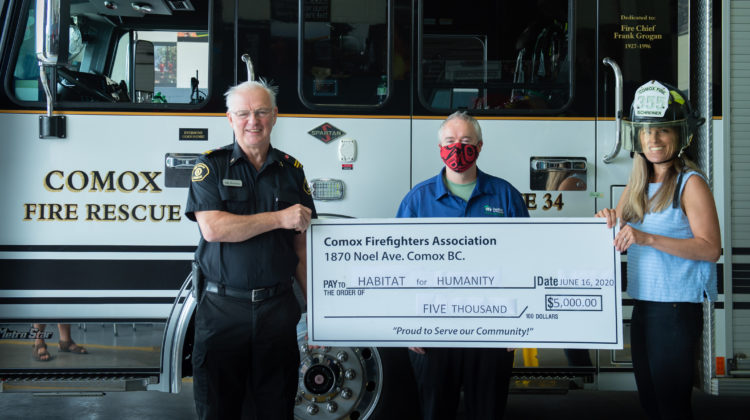 The Comox Fire Rescue team is once again showing that they care for the community they serve.

This spring, they were supposed to help out with the construction of homes for Habitat for Humanity Vancouver Island North.

Unfortunately, COVID-19 meant the cancellation of all of Habitat’s Team Build Days, a fundraising initiative in which local businesses and groups make a donation in exchange for a private day of team building on Habitat’s construction site.

Fire Chief Gord Schreiner says, rather than waiting until they were able to get on the building site again, they chose to make their donation to Habitat now, a time when funding is more important than ever for all nonprofits.

“We originally reached out to Habitat about doing a Team Build Day because it was a great fit,” explained Schreiner.

“We have lots of skilled labourers, and we try to help out groups like Habitat wherever we can. Our build day was cancelled, but we thought, ‘let’s get them the cash anyways’ because the builds are still continuing.”

The $5,000 donation came shortly after the firefighters donated $500 worth of fire safety equipment to Habitat’s upcoming ‘Bid to Build’ online auction fundraiser.

“Number one is smoke alarms installed and working. A minor investment that could make a huge difference in your lives.”

While this may seem obvious, Schreiner says they go to many houses where the smoke alarms have been disconnected. His second ‘must-have’ is a fire safety plan that your entire family is aware of.

“All family members should know where to meet outside. It’s very chaotic when a fire starts in your house.”