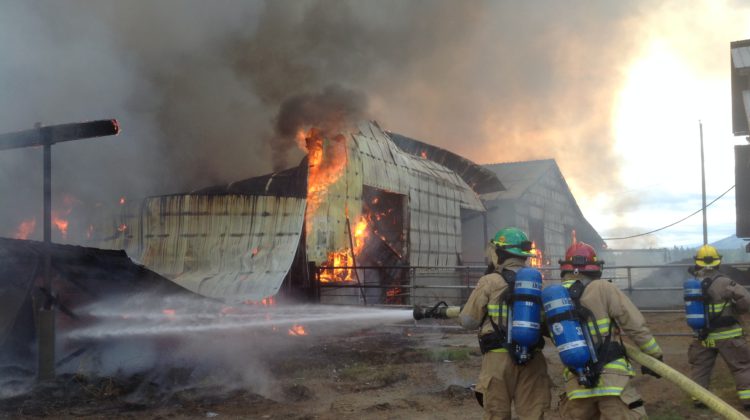 A GoFundMe page created for a family impacted by a massive barn fire in Oyster River is inching towards its goal.

Kari Roos organized the GoFundMe for her parents, Ken and Lisa.

On July 1st, her parents lost three out of their four barns to the fire, which was sparked by a hay bale falling off a skid steer and landing on a hot exhaust.

Inside the barns were Ken’s hay and round bale crops, along with his trucks and trailers, and other miscellaneous farm equipment.

Kari says the family lives off of a well system, which was also destroyed during the fire.

Due to this, they are having to truck in water for themselves and the animals on the farm.

Kari says the family has been “blown away” by the support of local fire stations.

“They worked hard for over 10 hours to contain the fire, and for the past few days, they have been doing continual checks to make sure nothing is reignited,” she said.

She also thanked all the family friends and neighbours who have dropped by to help hay, give food and for those who have been willing to donate their trucks and trailers during this time.

“If you know my parents, then you know they work so incredibly hard to keep their farm running and are going to be the last people to ask for help,” Kari said.

“So, as their kids, we would love to see them get on top of this unfortunate event.”

You can link to the GoFundMe here.