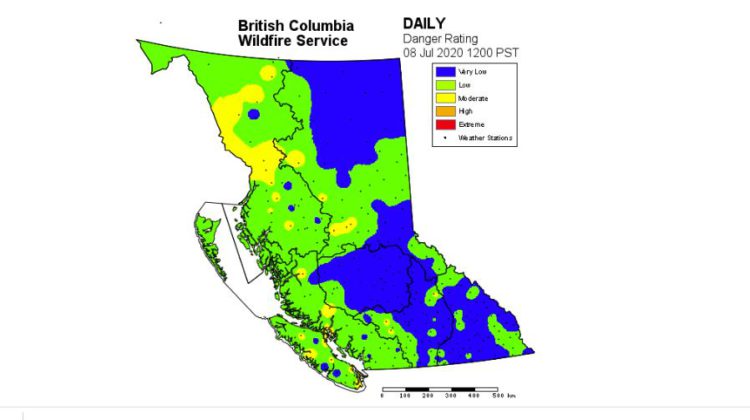 There’s a positive spin-off to the cool and rainy summer we’ve been having, so far.

The fire danger rating remains low across the Coastal Fire Centre, which includes Vancouver Island and the Sunshine Coast.

From April 1st to July 9th, 237 hectares have burned across the region.

That’s a fraction of the 10-year average of about 2,754 hectares over the same period.

“We’ve had a fair amount of rain and whatever warm weather we’ve had has been well spaced in between rainy periods, so it’s very good for the forest,” she said. “The forest is well hydrated and it’s not burning as quickly as it could if it was dry.”

MacPherson also pointed out that we’ve had no recorded lightning strikes, which partly accounts for each year’s fire activity.

“Our 10-year average for this date would be about 13 lightning-caused fires and we’ve had zero,” she said.

And while Mother Nature has done her part, MacPherson is reminding you not to let your guard down.

“We do want to remind people, if they do have any type of a burn, that they’re responsible for controlling it,” she said. “They have to be very careful when they start a burn, and don’t be complacent because it has been wet. Keep control of it. You have to be beside the burn when you do it, you have to make sure you have a means of putting the fire out.”

She recommends that you have water, a shovel, and a rake nearby and to put a fire out if it gets windy because that can cause it to get out of control quite quickly.

Overall fire activity in 2019 was well below the 10-year average and was the second-least-active wildfire season since 2011.

A total of 189 airtanker missions (i.e. requests for an airtanker to assess and/or suppress a wildfire) were carried out in 2019. The total cost of wildfire suppression in 2019 was about $182.5 million.

Even though the 2018 wildfire season was the worst on record, it didn’t flare up until mid summer.