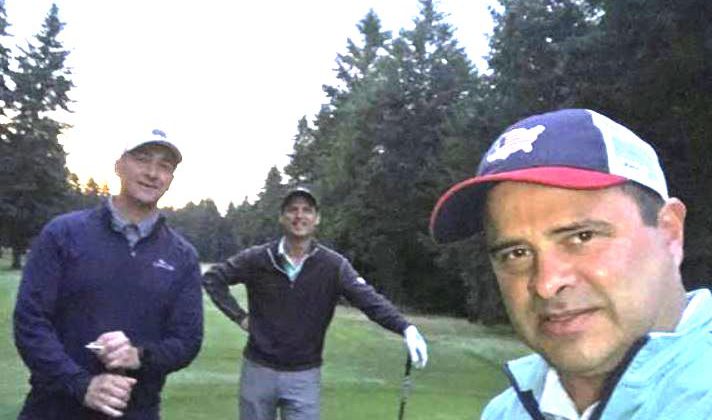 On July 4th, PGA professionals Brian Wise, Rod Prieto, and Mark Valliere golfed from 5:00am to 9:30pm, during a fundraiser for ALS. (Supplied by the ALS Society of BC)

That’s the final tally after three PGA professionals and others golfed at Crowne Isle Golf Course on July 4th as part of the 15th annual PGA of BC Golfathon for ALS.

Throughout the province, golf pros have been taking part in the fundraiser, presented by Pacific Blue Cross.

From sunrise to sunset, they golf as many holes as possible to raise funds and awareness for people living with ALS.

The PGA pros joining forces for the Courtenay event were Brian Wise, Rod Prieto, and Mark Valliere, who golfed from 5:00am to 9:30pm.

Brian Wise, Associate Golf Pro at Crown Isle, said the highlight of the day was when some of their junior members joined them during the last round.

Proceeds provide support services to ALS patients and their families, friends, and caregivers provided by the ALS Society of BC.

You can help your local golf professionals to raise awareness and funds for the ALS Society of BC by donating here.

Amyotrophic Lateral Sclerosis (ALS), also referred to as Lou Gehrig’s Disease, is a fatal neurodegenerative disorder that affects the person’s motor neurons that carry messages to the muscles resulting in weakness and wasting in arms, legs, mouth, throat and elsewhere; typically the person is immobilized within two to five years of the initial diagnosis.

There is no known cause or cure yet.