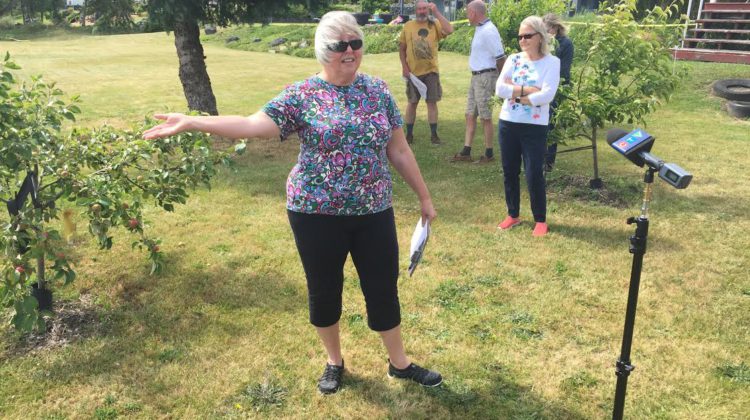 Sandra Wagner organized a press conference on Friday to show where the existing path is, and where homeowners would like it to go. (Supplied by Troy Landreville, MyComoxValleyNow.com staff)

Some homeowners along South Island Highway in Courtenay don’t like where the city plans to put the Riverway Extension Trail.

Sandra Wagner organized a press conference on Friday, and says the location of the proposed trail is too close to homes.

She said they’re in favour of the trail that the city plans to build this fall, but we are “unanimously and vehemently opposed to the location of some parts of the proposed trail.”

Wagner said trail users have been walking along an existing path for more than 30 years and are “shocked and dismayed to find out they will now need to walk beside peoples’ homes and patios instead of along the foreshore.”

Wagner said the existing path is on private property and several feet from the city owned land that divides the yards into two sections.

She added that the city plans to use the land that runs through the yards to build a public trail.

“The city would like to put the trail so close to my cabin, that it would require removing the deck and the stairs,” Wagner said.

“The gentleman who lives there has lived there for 20 years, he is on a disability pension, he has a brain injury and he gets minimal rent. If we remove the deck, we will be removing his extra fire exit, or way to get out the house.”

Wagner said neighbours have proposed a compromise to the city to place the trail adjacent to the property line.

“They have not granted to do that,” Wagner said.

One of Wagner’s main concerns is safety.

“When they put the trail another 15 feet that way (towards my home) they are right beside my grandchildren and I am just so terrified that… anybody will have access to where they play.”

Wagner says the homeowners would trade a 4.5 metre piece of land that was on higher ground (no fear of global warming or damage from winter storms) and still near the foreshore, “allowing trail users to enjoy ocean views, but far enough from the homes to remove some of the safety, security and privacy concerns.”

However, she claims the city” has refused citing global warming as a reason that the trail could not be built near the foreshore, where the existing path runs.”

Sally and Don Roth are Wagner’s neighbours. Sally says they’ve tried for over a year to negotiate with the city to come up with a compromise that would suit the city and trail users, but also give homeowners some security.

“We have tried talking to them, emailing them, and they’ve been absolutely intransigent about considering a (land) swap. They simply say, ‘No.’ So we have even made them an offer whereby we suggested this swap and we said would put $10,000 in from the homeowners towards costs, and they didn’t even bother to respond and reply to that, at all,” Sally added.

“The city talks a lot about transparency but we haven’t seen it on this issue.”

Don says it seems the city is on a fast track to push this through, regardless of giving residents an opportunity to appear before council to voice their concerns.

According to Wagner, homeowners have written numerous letters and emails to staff, the mayor, and city councilors, citing their concerns about safety, privacy, and security if the trail is built so close to their homes, “but with no results.”

Wagner said all council discussions about the trail have been held in-camera, so neither the public nor the property owners know why the decisions were made.

She pointed to the City of Courtenay Official Community Plan, which states in Policy 4.6.6.3 : “1. Wherever possible, the walkway portion of the Riverway system will be adjacent to the foreshore of the Courtenay River, slough and estuary. Where necessary or desirable, land acquisitions or easements will be sought to accomplish this objective while considering the integrity of these areas.”

Wagner said about 100 trail users have signed a petition to move the trail closer to the foreshore, adding that the number “would have been much bigger if physical distancing had not come into effect.”

In response, Courtenay Mayor Bob Wells said the South Courtenay Riverway extension has been on the books for quite some time, “probably at least since 2005, if not before that.”

He noted that in 2014, the CVRD completed its portion and this is the only section that needs to be done to complete the trail.

“In terms of its location, the city has its own right-of-way,” Wells said. “It’s city-owned property that’s on the former railway and a couple of things that really jump out (is), one, moving the trail from that location closer to the shore is going to result in obviously some bigger issues in terms of erosion and affecting the native species because most of that land is untouched.”

Wells said experts including landscape architects, engineers, and archaeologists all strongly recommend that the city stays on the path that’s already there.

The path has already been disturbed when the railway beds were engineered, Wells said, and “so we don’t have to worry about messing around with potential middens, soil erosion and of course, messing with the native plants that would be there.”

Wells said he and other councillors have met with the homeowners, and staff have said this project has led to “more meetings with homeowners than any other project in recent history.”

“We know we’ve done our due diligence to make sure we are understanding and hearing the concerns,” Wells said. “I fully get it that it’s in their best interests for what they call a land swap, but there are so many issues that that raises, when we already have a very strong plan going forward.”

He said at the end of the day, this all started by people building close to city property.

“Unfortunately, as properties change hands and people aren’t necessarily that clear on what the future of this property is, I think that’s where the confusion came in,” Wells said.