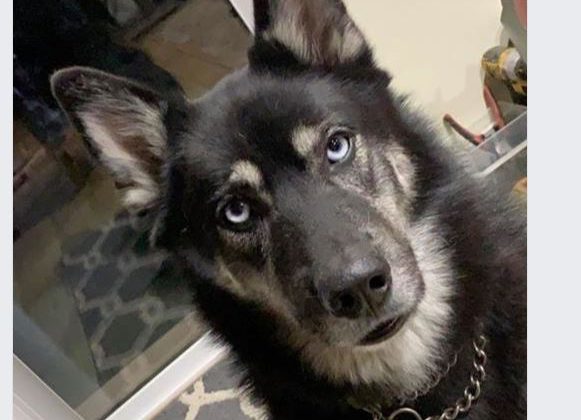 Bonnie, a three-year-old husky/shepherd/wolf cross, threw up pieces of hot dogs with her full meal of kibble. Her owners are wondering how hotdogs made it into their fenced backyard. (Supplied by Briana Oke)

A Campbell River family is warning local pet owners after their dog was sickened from food that found its way into their fenced yard.

Bonnie, a three-year-old husky/shepherd/wolf cross, threw up pieces of hot dogs with her full meal of kibble.

This wouldn’t be all that unusual except for the fact they hadn’t had hotdogs in their home for several weeks, if not longer.

While she has no way of saying for sure, Bonnie’s owner Briana Oke suspects that the hotdog may have been poisoned.

“My first instinct was that someone had given them to her, and I thought about the incident down island where dogs had been poisoned with hotdogs and antifreeze and various other things, so I put it all in the freezer and I did a big sweep in my backyard and couldn’t find anything else,” Oke said.

The thrown up kibble and hot dog pieces froze within an hour or two so that eliminated antifreeze from the equation.

After Oke shared the incident on Facebook, several other people from the area posted that something similar happened to their pets.

“Within a few hours of me making this post, I had over 10 people, between comments and messages, who are, it turns out, my neighbours – live down the street, live two streets over… all have had their dogs either at the vet for poisoning, and a couple had passed away from poisoning.”

While Bonnie hasn’t shown any other symptoms since the incident, it left Oke wondering how the hotdog weiners ended up in her yard in the first place.

Adding to the family’s suspicion is a rash of neighbourhood break-ins and thefts.

“We’ve had someone in our shed in the past, that had rummaged around in it, we’ve had bags of bottles that we’ve put in our backyard for people to come to pick up, like sports teams and stuff, and a few hours later they’ve been gone, so there are definitely people going around, scoping backyards,” Oke said.

She called the Campbell River RCMP but was told there wasn’t enough evidence to warrant a file.

“Regardless of how my dog got a hotdog, someone either gave it to her in ill pretense or (a) positive one, I don’t know, but with all these other people around me that have had their animals poisoned, that to me is suspicious,” Oke said.

She added that if it was a kid in the neighbourhood who tossed the hotdog into the yard, that’s not okay, either.

“What if my dog had allergies? That’s a parent/child conversation.”

Oke noted that they hadn’t taken Bonnie on a walk that day and when they do take her out of the yard, it’s usually on a logging road where she can run.

“That gives her the best exercise, makes her the most tired,” Oke said. “We take her straight from the house to the vehicle and we drive straight out to a logging road.”

She’s now cautioning anyone who lives in Willow Point, specifically around the Georgia Park area, to check their yards and keep a close eye on your pets while they are outside.