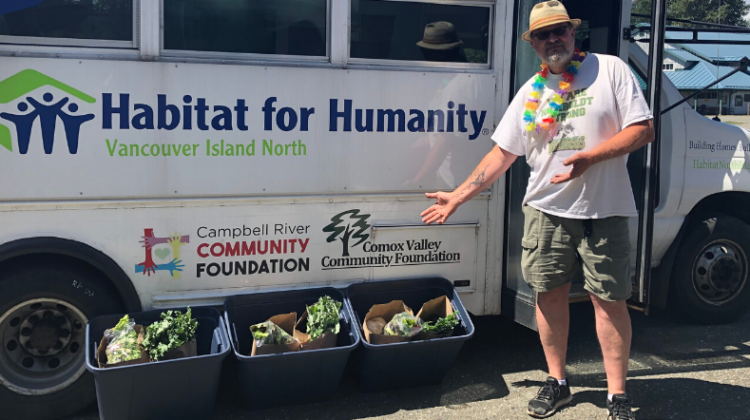 The Lush Valley Food Action Society has a new set of wheels this summer thanks to Habitat for Humanity Vancouver Island North.

With the onset of COVID-19, volunteer opportunities changed for Habitat VIN.

This meant it no longer needed its ‘Builder Bus’ to transport volunteers to its build sites between Courtenay and Campbell River.

As the school year came to a close and Student First school buses were no longer available to Lush Valley, Habitat VIN agreed to loan its bus to the nonprofit.

Lush Valley, a Comox Valley organization that focuses on food security, is now using the bus five days a week.

The bus is being used to provide dignified and contactless distribution of Good Food Box hampers to those in need of food support.

“Lush Valley was in need of a bus for their Good Food program and they reached out to us,” says Habitat VIN marketing and communications manager Cady Corman.

“We had already collaborated with them in the past by giving them some containers for that program. So it just worked out really nicely that they were in need of a bus, we didn’t really need our bus right now, but we still want to have it out working in the community because that’s what it’s really for.”

Corman adds that the purchase of Habitat’s ‘Builder Bus’ was sponsored, in part, by the Comox Valley and Campbell River Community Foundations.