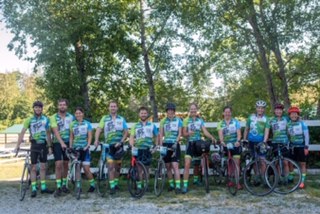 The Comox Valley CyclePaths are once again taking part in the Cycle of Life Tour, even if it’s a little different this year.

Normally, the group joins others across Vancouver Island to raise money and ride 200 kilometres for Hospice care organizations.

Raida Bolton is the team captain for the Comox Valley Hospice CyclePaths.

She says this year instead of doing the ride together, each individual was encouraged to do the 200 kilometres by themselves and raise funds virtually.

“Traditionally what it would look like is we would spend months raising money for the Comox Valley Hospice and then this weekend would have been the weekend that we would’ve done the ride- which goes from Victoria to Salt Spring Island and back to Victoria again- but because of COVID-19 they cancelled the ride as we know it.”

“What they ended up doing was going virtual and anybody wanted to as a rider has agreed to do 200km between the 1st of July and the 20th of July so thats why we are riding on Saturday as a group.”

Bolton says everyone taking part in the annual fundraising campaign has their own reason why they want to raise money for the hospice and hers, is her dad.

“For me personally, my dad spent his final three and a half weeks in the Comox Valley Hospice at The Views and so that was a big motivator for me.”

“I always wanted to do some volunteer or charity work and I couldn’t put my finger on what I wanted it to look like until I had my experience with the hospice and them taking care of my dad when we needed it the most and so I thought this is ideal for me,” she added.

Bolton says the team also plans to ride for one of the members that passed away in May.

The group took to the streets this weekend to reach the 200-kilometre goal before tomorrow and have raised just over $20,000 so far.

To learn more about the Cycle of Life Tour or to donate to any of the teams, click here.