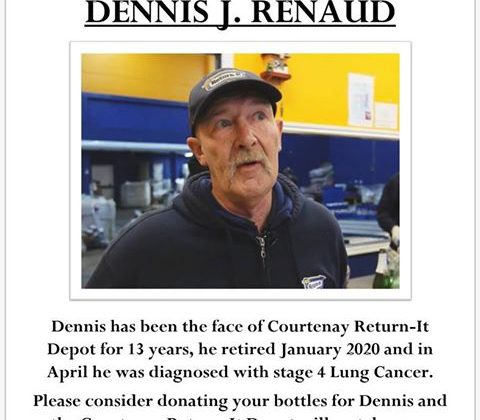 A bottle and can drive is being held Saturday to support retired Courtenay Return-It Depot employee Dennis Renaud.

Staff at the Courtenay Return-It Depot are rallying around one of their own.

They’re hosting a bottle drive on Saturday to support Dennis Renaud, who was diagnosed with Stage 4 lung cancer in April after retiring from the depot in January.

The depot owners will match every dollar raised to, they say, “help Dennis enjoy the last stage of his life.”

He said Renaud is a familiar face both at the depot and in the community.

“He dedicated a good chunk of his life to serving the community down here at the depot,” Cook said.

Cook said that his friend’s diagnosis is a stark reminder that during the pandemic, “there’s still real life happening.”

“People are still getting sick on their own and trying to make every day the best that they can,” he added.

Cook said he wants to help out a friend whose dedication set the gold during his 13 years at the depot.

“He’s a good guy, he’s been like a father figure for a lot of the guys around here,” he said. “He was always here. So how can you look at someone, 65 years old, showing up every day, if you wanted to take a day off for whatever. He’s just that kind of guy.”

If you can’t make it to the bottle drive, you can help out ahead of time by dropping off donations at the depot.

“We’re putting them in bags and then on Saturday we’ll start sorting it out,” Cook said. “People are donating cash down here, and the depot is going to match it.”

“I’m looking forward to showing him what we can do for him,” Cook added, “(and show) what the Comox Valley has to offer.”

Cook hopes that Renaud will make an appearance, depending on how he’s feeling. “He can say ‘hi’ to some of his old customers that come to know quite well and say ‘hi’ to us guys down here that have worked with him for years. I’m hoping he’s feeling good that day and he can come down for an hour or two and say ‘hi.’”

There will be a designated spot set up for bottle and can donations.

“On Saturday we’re going to go crazy trying to sort through ’em all and see how much money we can come up with,” Cook said.

Cook predicts that the fundraiser will do well. “I think a lot of people know Dennis, and if they don’t know him by name they will know him when they see his picture. They’ll be (saying), ‘That’s the guy, I remember him.’ If I had to guess, I’m gonna say it’s going to be a couple thousand dollars and that would make me feel happy, for sure.”