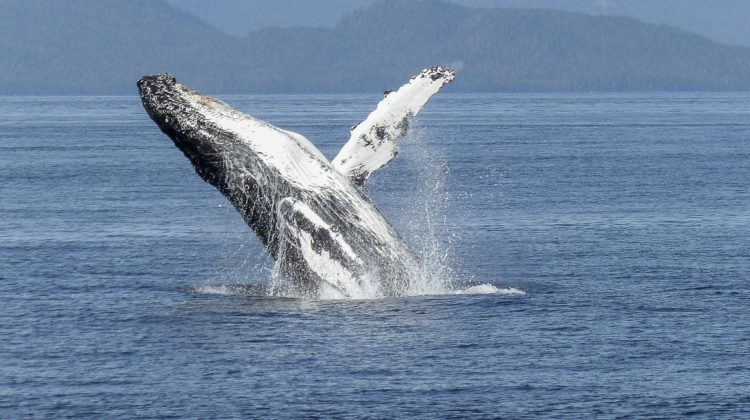 Details are coming in about as many as three humpback whales entangled in fishing gear in the waters off Central Vancouver Island.

The Marine Education & Research Society (MERS) says one of the whales, named Checkmate, was documented as entangled on Saturday due to the vigilance of a member of the whale watching community around Campbell River.

According to the society, the entanglement shifted to only be under the surface of the water, around the whale’s pectoral fin.

“This makes disentanglement extremely difficult and it was also not possible to attach a tracking tag to the rope so that Checkmate could be found this morning so that disentanglement attempts by DFO can continue,” MERS said in a Facebook post.

The Department of Fisheries and Oceans (DFO) says it “responded to and located” an entangled Humpback in the Sutil Channel near Quadra Island on Saturday.

It had a trap trailing close to its body with the entanglement of rope through its baleen.

“There were great efforts from DFO Marine Mammal rescue, DFO C&P Campbell River and Straitwatch, unfortunately, we were not able to attach a working line/satellite tag to the gear given how tight the rope was to the body of the whale,” DFO said in a statement.

On Sunday, while en route to relocate the whale, an entangled humpback calf was reported in the same area.

DFO responded to the entanglement, which turned out to be a juvenile.

A crew worked to disentangle the animal for 10 hours from Salmon Point Campbell River to Kelsey Bay.

They were able to remove over 200 feet of rope from the calf.

As the weather deteriorated, they attached a satellite tag to the remaining trailing gear.

The DFO is out today with Port Hardy C&P (lead vessel) and MERS (support vessel) to finish the disentanglement.

The DFO Marine Mammal incident reporting hotline has also received a report of a third humpback in the Central Coast area entangled in a seine net and is mobile with a 100 ft of netting.

This animal has not been relocated.

The DFO stressed that debris is a real problem for marine wildlife.

“The public can help prevent entanglements by cutting packing material, banding, rope and other looped material before disposing of it, and by not disposing of these materials in the marine environment,” the statement read.

DFO is a coordinating member of the B.C. Marine Mammal Response Network.

Any response to a marine mammal in distress is evaluated on a case-by-case basis.

You’re encouraged to report any marine mammal in distress in Canadian waters by calling The Marine Mammal Incident Reporting Hotline at 1-800-465-4336.