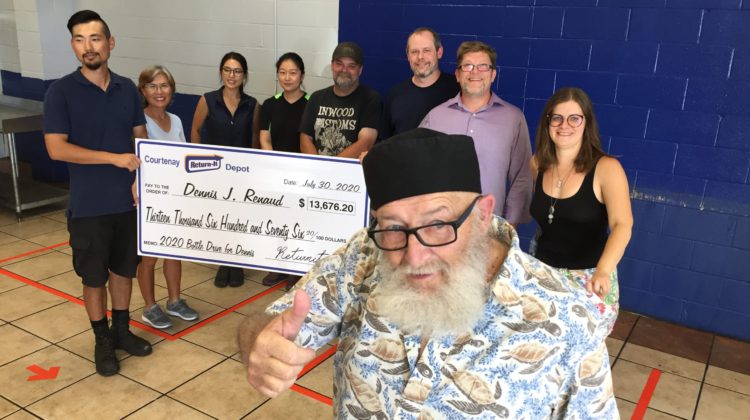 Friends, colleagues and strangers have rallied around Dennis Renaud, who worked at the Courtenay Return-It Depot for 13 years before being diagnosed with Stage 4 lung cancer in April.

A bottle drive organized by co-worker Richard Cook raised over $6,000 for Renaud last Saturday. The depot then matched it dollar-for-dollar for a grand total of $13,676.

Since the cheque was written, another $90 in cash donations came in along with another $200-plus dollars in an account set up for Renaud.

Renaud accepted the cheque during an emotional ceremony Thursday night.

As for what he’s going to do with the money, the 71-year-old Renaud said at this point, he has no idea. He is contemplating using some of it to see the island from a whole new perspective.

“I was thinking of doing the helicopter (tour) out of Campbell River,” he said. “That would be a nice thing to do, go up to the top of the glacier and sit there, take a photograph of the world from up there.”

It’s fitting that last Saturday’s fundraiser and subsequent ceremony were held at the depot, a second home for Renaud since he started working there in 2006.

“A few years ago, I left for a year-and-a-half, and (as for) memories… too many. Too many memories. Always busy, always expanding here. When I first started we were up on McPhee Avenue which was like a dungeon. It was an old building,” Renaud said.

“Now look at it, we’re doing electronics and everything else.”

For all those who donated cans, bottles, cash, and wrote cards and letters, Renaud had this to say: “Thank you. I appreciate it very much. It’s pretty well all you can say. I’m not a man of words.”

Return-It owner Sook Lee wrote a letter to Renaud, which was translated by her daughter Emily Kim.

It read, “Dennis, the biggest blessing while running a business is having good employees. All the years you’ve worked for me, you never disappointed me. You were always there on time and you never gave excuses. You worked hard and with passion and you always did what needed to be done without me having to tell you what to do. As a business owner, I am lucky to have had such an employee and friend.”

She continued, “It shocked and saddened me to hear your news and my heart hurts. I hope you beat the cancer and live a long, healthy, happy life. Thank you for all your dedication and commitment. I will always remember you.”