Wildfires in check across Coastal Fire Centre, despite barrage of lightning strikes 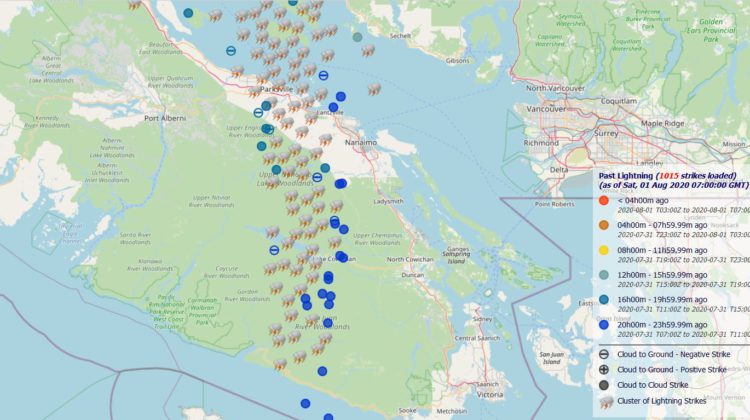 B.C. officials are talking about a light show for the ages.

It happened between 3:30am and 4:30am last Friday morning, when the Canadian Lightning Detection Network captured over 1,000 lightning strikes over Vancouver Island.

To put it in perspective, B.C. typically sees an average of 103,473 lightning strikes for the entire month of July.

Environment Canada meteorologist Matt MacDonald said to record 100,000 strikes over a four-day stretch “is rather exceptional.”

On the wildfire front, the Central and North Island escaped relatively unscathed.

“The band of lightning went directly north/south and it started in Port Renfrew and it moved up and over and headed over to the Sunshine Coast, and we had 22 new fires from Thursday last week,” Jakobsen.

Lightning did spark a small wildfire at Clear Lake on Quadra Island early Sunday morning. It’s already under control and only grew to be .07 of a hectare.

Jakobsen said a ‘Junuary’ that saw a fair share of rain and cooler-than-normal temperatures helped cushion the blow on the island and coast.

Jakobsen said the region as a whole did see its fair share of lightning-caused fires.

“When I came to work on Friday, the number of fires in the Coastal Fire Centre was 50, and this morning it’s 69,” Jakobsen said today.

“I think British Columbians are very wildfire aware and recognize that we all want to protect our beautiful environment and our forests so that we can recreate safely. The public has been doing a great job with safety in the woods with open fire.”