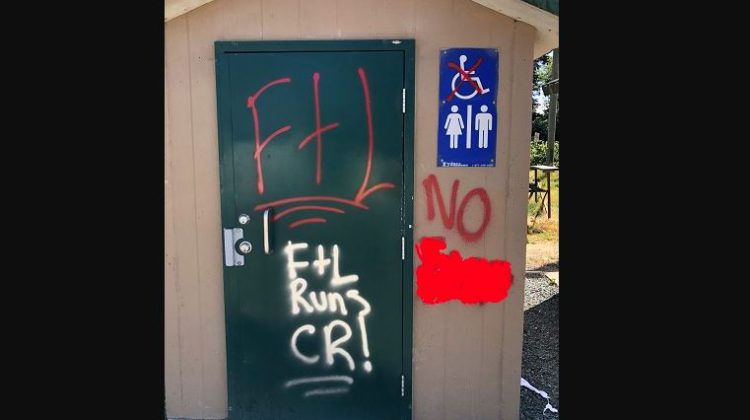 One or more vandals spray-painted much of Nunn's Creek Park playground and bathrooms with graffiti over the long weekend. (Supplied by the Campbell River RCMP)

The Campbell River RCMP wants your help in tracking down vandals.

This comes after someone spray-painted much of  Nunn’s Creek Park playground and bathrooms over the long weekend.

The taggers, identifying themselves as ‘F and L’ used blue, orange, and silver paints to smother the park with sexually explicit images, and racial and sexually discriminatory words.

“The hate speech that was posted referencing people’s culture and people’s sexual orientation is entirely unacceptable,” Tyre said. “It would seem that the taggers took aim at people with physical disabilities as well.”

Tyre said it’s difficult to pinpoint exactly what their intentions were.

“At this point, it’s not clear whether the actions of the taggers were based on shock value or whether they truly were motivated by hate for any minority groups.”

“It’s our hope,’  Tyre added, “that someone either saw somebody committing the act or they were witness to a person with spray paint on their clothing or hands this weekend. This kind of action really shouldn’t be tolerated by anyone in the community and we need the public’s help to hold these taggers responsible.”