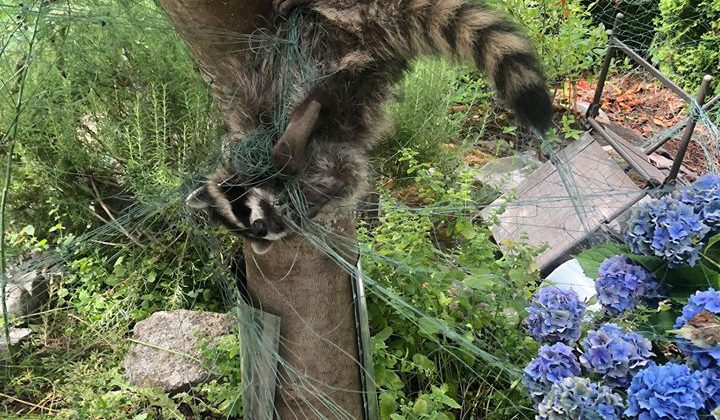 A raccoon was entangled in netting in Comox last weekend. (Supplied by Kiersten Shyian)

The MARS Wildlife Rescue Centre is asking homeowners to think twice before installing netting to protect their flowers and plants.

Assistant manager of wildlife rehabilitation, Kiersten Shyian, teamed up with a MARS volunteer to free a young raccoon from a net in Comox last weekend.

The homeowners put it up to protect their plants while they were away on vacation. 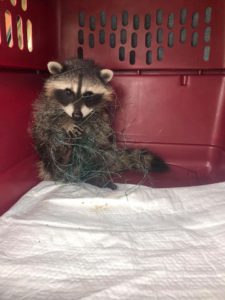 A raccoon was entangled in netting in Comox last weekend. (Supplied by Kiersten Shyian)

This was the second animal to be saved from this net in two days.

The other was a young fawn.

Shyian said this kind of netting can be very dangerous to animals.

“We want to make sure that people know before they put anything like that out, the consequences that it could have on wildlife, especially if you’re not home and away for a while, and nobody is monitoring it. We just wanted to make sure that the use of wildlife deterrents like that isn’t going to harm the animal or caused any undue suffering, because who knows how long that little guy would have been there if somebody had not phoned.”

She said freeing the raccoon took some work. “We had to cut some of the net away to get him out because he was just dangling from a tree. So we did have to cut that section out and he was still tangled in the netting, so we managed to get him in a kennel and then when we got back here (to the MARS centre) we had to pin him down and cut the rest of the net off of him.”

The raccoon is now being cared for at MARS’ wildlife hospital while recovering from a very swollen foot due to a loss of circulation, because the netting was deeply lodged around it.

She said neighbours were alerted by the raccoons screams.

The raccoon is on pain medication and anti-inflammatory drugs with the hopes that if its foot heals, it will be released back into the wild.