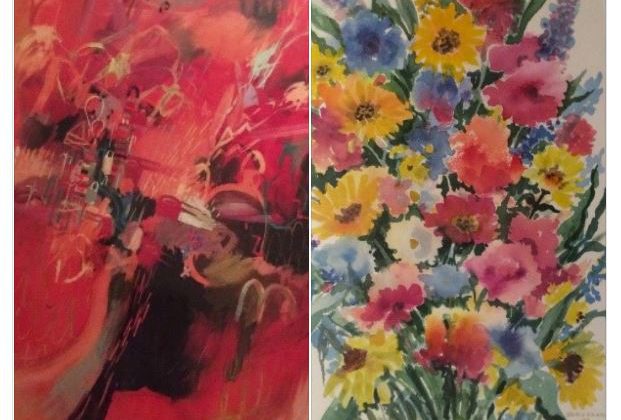 Two of the stolen art pieces: two, both by local artists. The first is called "That Did It" by Meghan Hildebrand, the second a watercolour bouquet by Doris Kramer. (Art from the Attic, Facebook)

The Powell River RCMP is on the lookout for dozens of pieces of stolen art.

“Police found that three of the storage units had their locks cut off,” Bakker said.

“Police have been speaking to the owners and determined that a number of pieces of artwork was stolen from one of the units, as well as a MIG welder from another one.”

Bakker said the MIG welder was worth roughly $750 and the value of the roughly 85 pieces of art is unknown at this time.

The art was supposed to be part of Art from the Attic, a  fundraising event with proceeds to support Powell River Hospice and the Sunshine Gogos.

Because of the generosity of the public, organizers had close to 300 pieces of art; most of it stored in a Gogo’s basement.

In early June they were offered free space at the storage facility, so the pieces were moved there.