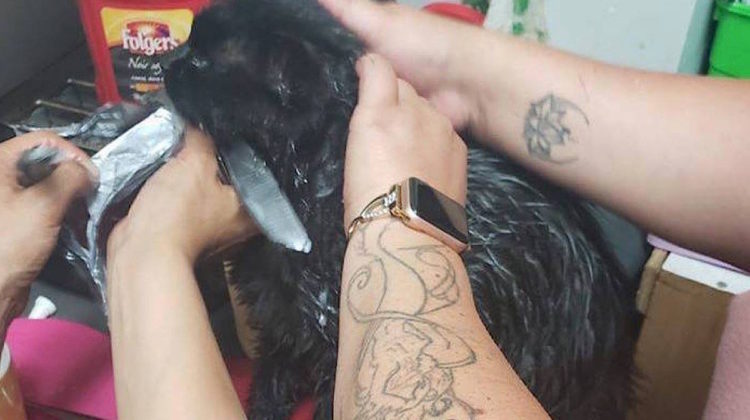 A seven-year-old cat, named Miya was discovered by kids in a housing complex garbage bin in Courtenay on Aug. 17. (Photo provided by Megan Cruz, Facebook)

A cat found covered in cooking oil and wrapped in duct tape in Courtenay is on the mend.

The seven-year-old named Miya was found in a trash bin on Aug. 17.

“We did set her up with a vet appointment right away with her owners. She was seen at Comox Valley animal hospital,”  Dixon-Phillips said.

“She actually physically is doing really well. She’s definitely not going back outside. She’s been keeping to herself is what the owners have said, but overall, she’s doing pretty good considering the tragic event that she endured.”

The cat was cut free of the duct tape but managed to escape and volunteers spent over four hours searching for her before returning her to the family.

They then did their best to clean the oil but decided to reach out to Kitty Cat P.A.L.S for a helping hand.

“Our medical team helped bathe her and clean her ears out. She was coated in oil, even all in her ears, her eyes… it was really awful,” Dixon-Phillips said.

“Plus any tape residue because she was duct-taped had to all come off and be washed out.”

Dixon-Phillips says it took “quite a bit” to get the oil off of the cat’s fur.

“It still will take some more time and daily baths but it’s a work in progress, but she’s doing really well.”