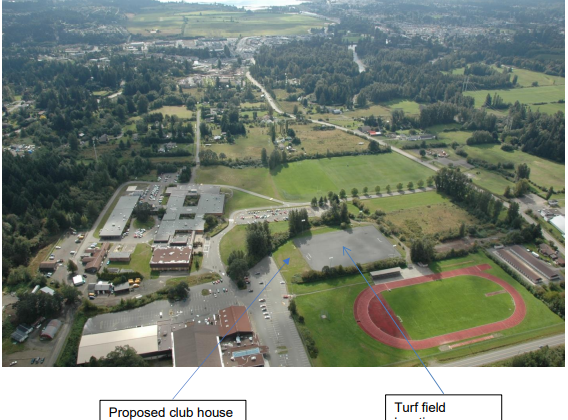 Photo of the proposed new club house near the G.P Vanier Turf (Provided by the Comox Valley School District)

A new field house is on the way for users of the G.P Vanier turf soccer field.

At Tuesday night’s school district board meeting, members voted in favour of the proposed project which, while costing the district nothing, will be cited on district property.

A report by, SD71 Director of Operations Ian Heselgrave highlighted that the turf soccer field is used extensively by G.P Vanier gym classes throughout the day and is loaded with local soccer players every evening and weekend.

The only washrooms or change areas available to players, coaches, referees and fans are located within the Comox Valley Sports Centre.

The new clubhouse will include washrooms, change rooms, and storage space and will be similar to the clubhouse located at the Valley View fields, next to Mark R Isfeld Secondary.

The CVUSC’s initial proposal also agreed that all costs associated with the construction of the facility will be borne by the soccer club. It has since received $115,000 in funding from the CVRD for the project.

Once the house is built, it will become the property of the school district and could be used by a variety of user groups with preferred access by the soccer club during soccer club times.