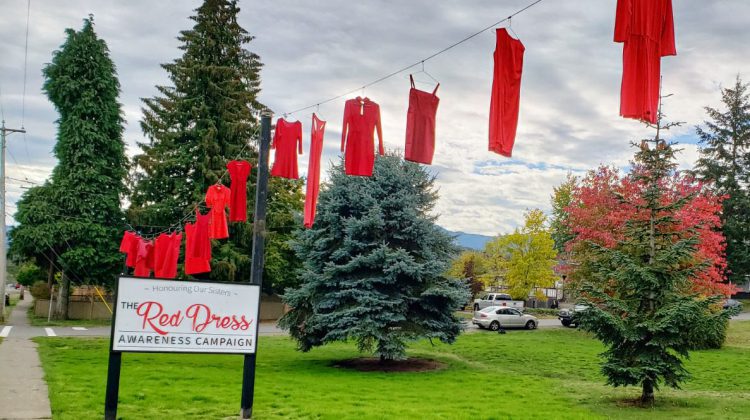 The Red Dress Campaign is underway. Pictured is the 2018 installation in Cumberland. (Vista Radio file photo)

The Red Dress Campaign is underway.

Throughout this week, you’re encouraged to hang up a red dress to recognize Canada’s missing and murdered Indigenous women.

Run by the Comox Valley’s Kumugwe Cultural Society and Comox Valley Transition Society, the campaign started Sunday and runs until Oct. 3rd. If you want to show your support, it’s as simple as hanging a dress in your front yard, business, or storefront.

The campaign’s origins date back to 2015 when Walking With Our Sisters – K’omoks opened its door to the community to experience a travelling memorial art installation honouring missing and murdered Indigenous women and girls.

Through the combined efforts of The IHOS Gallery, The Transition Society, and the Kumugwe Cultural Society, and with support from municipalities, organizations and businesses, over 5,000 guests visited the installation on the traditional unceded territory of the K’omoks First Nation.

In 2016 the same organizers came together and created The Red Dress Awareness Campaign & Installation which seeks to recognize and inform the public about the increasingly high numbers of missing and murdered Indigenous women and girls, both in Canada and the U.S.

In 2017, the installation was in Courtenay, in 2018 it was in Cumberland, and last year it was in Comox.

In support of the campaign,  volunteers started the Lil’ Red Dress Project, in which they create beaded red dress pins and earrings for purchase.

A report released last year said 231 steps need to be taken by governments and Canadians in order to end the genocide against Indigenous women and girls.